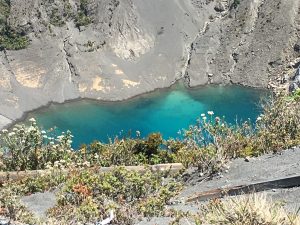 Costa Rica has long been a major eco-tourism destination.

Nearly one-third of the country’s land is protected. Eco-tourism has been promoted here, heavily, since 1996. No wonder Costa Rica is almost synonymous with eco-tourism.

The country has two airports, with 83 percent of people passing through San Jose’s hub.  That’s nearly five million passengers going through the Juan Santamaria airport, yearly. While many may head directly for the beaches, rainforests, or volcanos, some stay in the capital for at least a night or two. San Jose is not what calls the eco-tourists to this beautiful country.

For those who prefer basking in nature, the following is a best-bet half-day itinerary while in the big city.

“We are lovers of volcanos,” says a tour guide. It’s what he and his wife appreciate as nature’s home decor.

Become a lover of volcanos, too. Head to Irazú, the closest volcano to San Jose. It’s also the largest volcano in the country. The crater is 300 meters deep and more than 1,000 meters. It may not offer volcano boarding, moonlight trekking, or lava watching, as do volcanoes in Nicaragua, but visiting Irazú is a very easy half-day trip to detach from the hustle and bustle of the city.

“Our time isn’t volcanic. It’s too short. That’s why we have to enjoy life,” adds our bilingual tour guide and volcano-phile.

Checking out Irazú is ideal, as it’s a short drive from the capital. What’s more, the entire country is built by volcanoes, so it gives you a great up-close look at the natural landscape. There are 200 volcanic buildings or structures in this small country. Some appear to be traditional mountains. Others have sides that may have collapsed, as is the case at Irazú.

Irazú is a nice ride past the city that sits in the clouds, or mist, Cartago. It’s a continual upward climb from San Jose, which is already sitting considerably above sea level. The peak at Irazú is 3,432 meters above sea level. Set against black volcanic sand, during a sunny morning, there’s a warmth coming from both above and below. There’s almost a convergence of the clouds and mountain peaks, sun, mist, and sand. While the air may be a cool 13 degrees Celsius, you are warmed up by the seemingly close rays of the sun, yet protected gentle clouds.

Irazú is an active, albeit dormant volcano. It was the last active between 1963 and 1965. However, our tour guide explains that Costa Rican volcanic activity is nothing like those in Hawaii that pour out colorful lava. Costa Rica straddles fault lines. When the volcanos erupt, they spray a heavy amount of ash, up to two inches a day, and a slow spewing volcanic silica mud. Irazú sits on two different tectonic plates that are moving over magma. When they crash, there is a gasification effect that our guide likens to Alka-seltzer dropped in water.

On a clear day, you can see both the Caribbean and the Pacific oceans. If it’s not clear, you can still see two turquoise pools of water. These are rainwater, collecting in smaller craters, beneath the huge top-level crater that spans several football fields. The black sandy earth, while it looks completely barren, supports the growth of beautiful flowers, brush, and trees. Volcanic ash is highly acidic and burns everything, including trees. However, over time, it becomes a rich fertilizer.

In the surrounding area, leading up to and beyond Cartago, the land appears to be excellent for agriculture. Among the crops grown here are potatoes, onions, cilantro, broccoli, cauliflower, carrots, and cabbage.

Cartago and the Virgin of Los Angeles

If you take a guided tour to Irazú, Cartago will likely be on your itinerary.

Cartago, formerly the capital of Costa Rica, is worth a stop.  Back in 1635, a clear image of a virgin with a child appeared on a rock in the forest near Cartago. Nuestra Señora de los Angeles became the official patron saint of Costa Rica in 1824. The day in her honor, August 2, is one of the top three holidays in this country.  Each August 2, approximately 2.5 million people come to the Roman Catholic Basilica. Many, walk 22 kilometers, by foot, from San Jose. In anticipation of the enormous numbers of pilgrims, outdoor masses are held.

The original church in Cartago was leveled after a quake, so the impressive structure you visit today only dates back to 1912.  According to our guide, big quakes rattle Costa Rica every seven years.

For those not wanting to take a bus or rental car outside of San Jose, Sabana Park is a nice oasis.  Before the current airport was built in Alajuela, just outside San Jose, la Sabana was the only international airport in Costa Rica.  When it outgrew the tourism needs, Santamaria, and later, Liberia airports were built.  So, what to do with the old space? Convert the airport structure into a museum and create a lovely park out of the runways and surrounding area.

You can hike, bike, jog, skate, or just lazy around in the 72 acres of green space. There are areas for physical activity as well as lounging around. It really is right in the city center, yet you are far removed from the screeches of cars, buses, and taxis. Here, you can focus on the sounds of the birds and insects. Likewise, the fumes from heavy traffic are replaced by those of nature.