From Runways to Running Tracks in Costa Rica 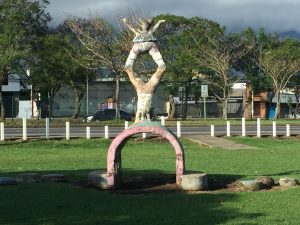 La Sabana airfield opened in 1940 in San José, Costa Rica. Its lifespan was short. Only 15 years after La Sabana welcomed its first flights, it was replaced by a larger facility 12 miles away in Alajuela, now home to the Juan Santamaria International airport (SJO). In 2019, more than five million passengers arrived at or departed from SJO. In April 2019, 464,390 travelers passed through the airport. That next April, at the height of quarantine, only 4,766 people flew in or out of the second busiest airport in Central America.

It’s hard to imagine that La Sabana, smack dab in the center of the nation’s capital, was once a landing strip. At the same time, back in the 1940s, the number of propeller planes headed in and out of the country must have been few.

Today, the structure that once served as the terminal has another use. Artfully remodeled to retain its original 1940s grandeur, the building is home to the Museum of Costa Rican Art which always has outstanding exhibits.

The expanse where runways once stood is a fitness fan’s haven. Instead of landing strips, there are ample tennis, basketball, and beach volleyball courts, a baseball field, a velodrome, multiple jogging paths, two ponds, and a national stadium that seats 35,000.

Even if the stadium is closed, there’s plenty of reason to visit the 178-acre oasis. Sometimes referred to as the lungs of the city, La Sabana Metropolitan Park is the largest green space in San José.

A Breath of Fresh Air

Most Costa Rican tourists are attracted by the country’s natural beauty. The oceans. The volcanos. The rain and cloud forests. The biodiversity. The flora and fauna. But San José is your typical congested city.

Back in 1955 when La Sabana airport closed only 180,000 people called San José home. Now, the capital is a metropolis filled with tall buildings and 1.5 million residents. There is congestion. Heavy traffic. Buses, trucks, and cars emit irritating screeches, squeaks, squawks, and honks from as early as 4 a.m. Every day. But if you head to the middle of La Sabana, you can disengage from the city. This is an island of quiet and peacefulness. You can appreciate the sound of the birds, watch the butterflies flutter by, and breathe in and enjoy the aroma of the flowers, fresh air, and green grass and pine, eucalyptus, and cypress trees all around you.

For the sports-minded tourist, you can get your workout here. (To reserve court spaces, contact the Costa Rican Sports and Recreation Institute, ICODER). Children can enjoy play areas. Families, friends, or lovers can unwind and share food and drink on the many benches or picnic tables.

Budget-conscious travelers take note. La Sabana is a great place to hang out, free. Even the museum has no admission fee, and there is a lovely small sculpture garden behind the exhibit spaces.

Two of San José’s most colorful events (canceled in 2020) originate at La Sabana. The Festival de la Luz is a long colorful parade filled with bands, dancers, and illuminated holiday-themed floats in December. A one-of-a-kind traditional oxcart parade takes place in November. The Boyero festival begins in the park where hundreds of oxen and their drivers line up before traveling down the Paseo Colon toward downtown.

Prior to Coronavirus, 38,000 people visited the park each week. Normally open daily, it is temporarily closed on weekends due to the pandemic.