Rags to Riches Legacy in Galveston 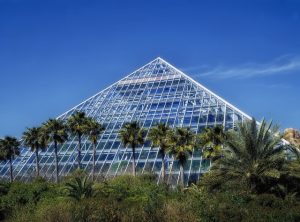 In Galveston, Texas, possibly the most recognized name is Moody. Two million people flock each year to the Moody Gardens, which offer 3-D and 4-D theaters, a discovery center, and several other Disneyesque attractions inside large glass pyramids. Unlike Disney World, Moody Gardens is actually a non-profit educational destination “utilizing nature in the advancement of rehabilitation, conservation, recreation, and research.”

The mega-attraction started in the 1980s with a barn and a riding area. It was designed as a small hippotherapy center after one of the Moody family members sustained head injuries from an automobile accident.

Back in the day, the Moody family seemed to own much of the city, and they still have large foundations, endowments and enterprises run by Colonel Moody’s descendants.

W.L. (aka The Colonel) was from Virginia and he was orphaned at age 15. He hit the books and became a lawyer. Then, he opened a newspaper, and eventually bought and sold cotton in Fairfield, Texas. By 1860, he was one of the wealthiest men in Texas. After the Civil War, he and his siblings moved to Galveston. They built a cotton press and the American National Insurance Company. But his business fingerprint spread far beyond that. He got into banking and cattle and even partnered with the Hilton hotels.

Today’s Hilton hotel guests in Galveston tend to visit the Moody Mansion, a 28,000 square-foot home with 31 rooms on four floors. In this premier tourist destination, the docents tell the story of the Colonel and the other Moody family members.

The home on Broadway Street is one of the finest in the city. It was built with limestone and brick that was shipped from Europe. It is mused that the materials came from Europe because it would have been more difficult to ship the materials from the mainland U.S. since Galveston Island was so hard to reach back in the Colonel’s era.

The home was built over a three-year period for the Willis family who only lived there a few years. When the Great Storm ravaged Galveston in 1900, the mansion was for sale, but no one wanted it, so Colonel Moody bought it at a bargain-basement price. While Mrs. Willis hired one of the best architects to build and decorate the home at a cost of $125-150,000, the Colonel paid only $20,000 for the mansion. Furnished.

Post-hurricane, despite the heavy oak storm outer doors and wooden window covers, it took six years to restore the home. Surprisingly, the precious stained glass windows were not affected. However, in 1961 when Hurricane Karla hit, there was damage to the glass. During Hurricane Alicia in 1983, winds of 120 miles an hour were too much for the seawall and the parlor ceiling at Moody Mansion collapsed.

The Moody Mansion was like a showroom. A fancy wooden desk was imported from Japan. The family had access to both hot and cold running water from cisterns, as well as gas and electric lighting. Apparently, this house was the first in Texas to have gas from coal that was shipped into the island.

This region saw the second electrical plant in the country, so the Moody’s were among the first to have electricity. Before elevators were the norm, the Moody family installed an elevator. However, it was lifted via pulleys. Along with the Colonel and his wife, there were four children residing in the mansion. Mary was the last of the Moody family to live in the mansion.

Mary, who ran the American Chicken Company, married Mike Northen who was 20 years her senior. When Mike passed away, she moved back into the family home. Mary was 62 when her father died and she took control by sitting on the boards of the 50 Moody enterprises. Mary lived in the house until she died in 1986.  But her foundation is currently housed right next door.

Mary’s siblings, though older than her, did not inherit the money or power line of the family fortune. One brother died of pneumonia at the age of 40. Another lost his millions in the depression. The Moody Foundation, which manages the Gardens complex, was launched by Mary’s parents, W. L. Moody, Jr. and his wife, Libbie Shearn Moody, in 1942.