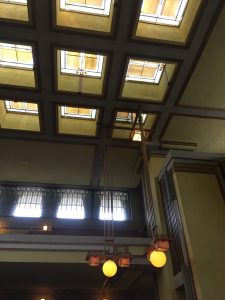 Having lived and traveled extensively in Mexico and South America, I’ve had my share of visiting churches. In Puebla, Mexico, a town I’ve been to multiple times, they say there’s a different church for each day of the year. That’s a drop in the bucket compared to places I’ve visited in India. Pushkar has 400 temples.  A relatively insignificant number compared to the 23,000 temples or shrines purportedly scattered throughout Varanasi which is just a few miles from where the Buddha gave his first sermon.

Regardless of size, or denomination, most houses of worship seem to shout out that they are centers for prayer and devotion to God.  Perhaps, that’s why Frank Lloyd Wright’s Unity Temple intrigued me. Set in Oak Park, Illinois, just west of Chicago, the Unity Temple is very simple. There are no colorful stained glass windows. No steeples or bell towers. In fact, no majestic ceilings, or intricate carvings. Not even any visible signs of the church organ. The temple is void of paintings, statues, altarpieces, crosses, or other visual symbols associated with religion.

Unusual in Wright’s days, from 1886 to 1891, the Oak Park pastor was a woman. She was also a close friend of Frank Lloyd Wright’s mother.  In 1905, lightning struck the church spire.  By dawn, the traditional Gothic-style building was ruined.

The minister responsible for the reconstruction of Unity Temple wanted the building to convey wisdom and truth, and encourage community and honesty within the walls.  He wanted to break the concept of religious buildings.

Enter, Frank Lloyd Wright. An up-and-coming architect. His home and studio were just a few blocks away. However, he was in Japan soaking up culture and architecture there.  No one was better apt to design this temple than Wright. His father was a Unitarian minister while his progressive mother, Anna, was a universalist. Most importantly, he was an out-of-the-box thinker.

Horizontal and vertical lines and slats of wood, accentuate square and rectangular earth-tone blocks. Zinc-detailed Tiffany-like windows break up the floor-to-ceiling concrete. The entrance is in a small Japanese-style garden courtyard on the side of the building. The facade is basically one large block with windows close to the roofline.

Unity Temple is in fact, two separate buildings joined by a large foyer. The larger of the two spaces is for classrooms and community events. The smaller space is the sanctuary.

“Wright wants you to go exploring,” the Unity Temple tour guide explains. There are no door handles. Doors and even the stairwells are somewhat hidden.

Wright maximizes space in the chapel through sub-levels.  As you first, enter, ground level, you may feel compressed, by the floors jutting out above and below. However, at the main pews, there is a feeling of expansion. The use of the different levels that sneak in and out also ensures that no one is ever more than 42 feet away from the pulpit, or far from each other.

Although Unity Temple is one of Wright’s earlier works, it has many of his trademarks, such as connection with nature, and building block visual elements. Interestingly enough, the clear-cut cubism and simple lines resulted from one of his childhood toys. He learned spacing and geometry from Froebel educational block sets from Germany. He once said that every time he built something, he felt the blocks in his hands.

“The maple wood blocks . . . are in my fingers to this day…These primary forms and figures were the secret of all effects . . . Mother learned that Friedrich Froebel taught that children should not be allowed to draw from casual appearances of Nature until they had first mastered the basic forms lying hidden behind appearances. Cosmic, geometric elements were what should first be made visible to the child mind.”

Wright was given a budget of $40,000 to build his first masterpiece out of concrete blocks. After four years, he’d spent more than double that. Apparently, still a bargain for churches of that era. Recent restoration cost $25 million.

The congregation’s Board of Trustees recognized this was indeed a work of art. Upon its completion, they thanked Wright, saying, “We believe the building will long endure as a monument to his artistic genius and that, so long as it endures, it will stand forth as a masterpiece of art and architecture.”

UNESCO, two months ago, named Unity Temple along with seven other Frank Lloyd Wright sites as World Heritage sites.  The only other Chicago area Wright building with World Heritage Status is the Frederick C. Robie House (1908-1910), located in Hyde Park.