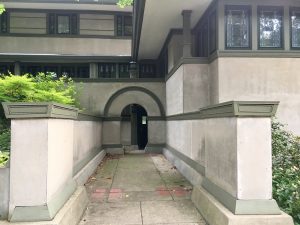 Visitors to Chicago will recognize the windy city has had many a great architect leave their mark here. Perhaps, none as much as Frank Lloyd Wright.

Many who appreciate architecture head just west of Chicago, to Oak Park, Illinois.  For this is where the highest concentration of Frank Lloyd Wright prairie-style buildings are, anywhere.

—Study nature, love nature, stay close to nature. It will never fail you.*

Born in Wisconsin, he was a precocious teen. He dabbled in civil engineering studies at the University of Wisconsin. After just two years, he moved to Chicago (in 1887) where he found work with “the father of modernism,” the great Louis Sullivan. The budding architect got married and moved to Oak Park in 1889, in part, to feel closer to the green landscapes he knew in Wisconsin, versus the big city. He was just 21 years old.

—Harvard takes perfectly good plums as students, and turns them into prunes.*

Wright lived in Oak Park, with his wife and six children, for 20 years.  His own home and studio were among his first projects in Oak Park, but he soon was hired by many others to build in his newly adopted community. Much of his work was done outside his day job.

Frank Lloyd Wright may have been considered an architectural renegade at the time. He eschewed the expected. Moreover, he sought to integrate nature with everyday living, bringing the outside, inside.

—Nature is my manifestation of God. I go to nature every day for inspiration in the day’s work. I follow in building the principles which nature has used in its domain.*

Wright’s work is typically identified by the simplicity and visible geometric lines. Horizontal and vertical.  His color palette was drawn from the different hues found in nature. In all his work, he strove to work in harmony with the landscape. So much so, that his own home studio was built around a willow tree that rose up through the ceiling.

—Simplicity and repose are the qualities that measure the true value of any work of art.*

Another aspect of Wright’s architecture is the distinctively Asian feel. Wright first visited Japan in 1905, the year he began work on Unity Temple, which is now recognized as a UNESCO World Heritage Site. His structures were influenced by Japanese temples, pagodas and gardens.

Oak Park, easily accessible on the rapid transit Green line, or a 20-minute drive from O’Hare Airport, offers visitors 25 Frank Lloyd Wright designs within walking distance of the home and studio where the celebrated architect lived for 20 years.

For those with an extra day, add on a visit to The Rookery, downtown, and The Robie House, in Hyde Park. The former is a stellar example of Wright’s interior design works. The latter is one of the eight Wright masterworks on the World Heritage list.

*All quotes, from Frank Lloyd Wright.