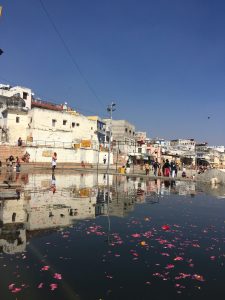 Pushkar, India: A Pearl in Rajasthan

Pushkar may not be on most people’s itineraries. Yet, it’s a favorite spot, or repeat destination, in Northern India for some.  Here are just a few reasons why.

Most places on the Northern India tourist trail are overpopulated and highly contaminated. Furthermore, many cities are known to be rife with dangers for women, in particular.

But, Pushkar, is a charming small town. According to the 2011 census, there were 1,204 people living within 242 households in the village itself. Of course, extrapolated population figures today are considerably higher. Nonetheless, this has a rural community feel. In the meantime, compare Pushkar’s size to the three or four million residents of Jaipur, and 20 million in Delhi.

During one 12-month period (2017-2018) the small town welcomed 43,124 tourists. That figure is like a pinhead compared to the number that flows through Jaipur or the Taj Mahal.

Finally, there are tuk-tuks and auto taxis to shuttle you around. However, for most, this is a place easily enjoyed by foot.

While much of India moves at lighting speed, Pushkar has a slow flow vibe. You can spend hours at an outdoor cafe. Stroll in and out of temples. Even better, you can meander to and around the lake all day. Then, rest up as evening approaches at the Sunset Cafe. Sit inside, on the patio, or just hang out on the beachfront to enjoy a tag team of musicians performing when the sun starts to go down.

Furthermore, for shoppers, this is a buyer’s mecca.  The market has a bit of the Jerusalem shut feel.  There are winding walkways and myriads of stalls. Plus, the food will transport you to Israel. There’s plenty of falafel, pomegranate juice, and Hebrew signs. Conversely, Pushkar is far much more chill than Jerusalem. No aggressive salespeople. Everything is eye candy. And, not hard on the wallet.  Clearly, the locals respect the income from the tourists and repeat visitors. Hence, no price gauging.

While Varanasi is undoubtedly the oldest continuously inhabited city in India, Pushkar is just a few notches down that ladder. On the other hand, according to legend, Pushkar was created by the gods. Whenever that may have been, it would certainly pre-date most tourist sites.

Regardless, Pushkar is mentioned in both the ancient epics, Ramayana and Mahabharata. Then, much later, in the 11th Century, an Islamic scholar mentioned the holiness of Pushkar.

The largest influx of tourists comes for the annual camel fair. This is one of the oldest festivals in India. Pushkar Mela, as it is called, will take place October 30-November 12, 2019.

According to one of the tourism representatives, the camel far attracts many from France and Spain. The Atlantic, in a pictorial, said, “One of the oldest and largest camel fairs in the world, Pushkar has grown to become an important attraction for foreign tourists in recent years. Aside from the trading of livestock, the fair includes music, sports, and other events such as the “longest mustache” and “Indian bride dress-up” competitions.”

Pushkar is definitely off the beaten path. Yet, not completely isolated. Pushkar is about 150 kilometers west of Jaipur, and 200 kilometers east of Jodphur. Hence, it’s right on the track for those seeking adventures in Rajasthan. Both Jodphur and Jaipur have airports, but the largest international airport, Delhi, is still accessible.

There’s an “express” train from Delhi to Ajmer. While it’s a more comfortable and upscale train than most, there are about eight stops on the way. The total ride is a good, seven hours. From Ajmer, it’s a 20-minute inexpensive taxi ride into Pushkar. It’s definitely worth the time to get far from the noise and air pollution of Delhi or Jaipur.

This is a Mecca for pilgrims. There are temples galore here. But, then, this is India, where temples are always everywhere.

However, Pushkar supposedly registers 400 temples.  That number, in and of itself is pretty high, even if some of the temples are store-fronts. But, when you consider the overall Pushkar population, it’s incredible. We’re talking two temples for every house.

Additionally, there are different types of temples, including a large Jain temple on one of the main roads. One temple, Savitri, sits atop a mountain. To get here, beyond the comfortably long walk, you take a gondola up the cliff. Not unlike the ski lifts in Colorado or Utah. Similarly, you get a great view of the small town and surrounding areas from the swinging cable car.

Whether it’s admiring the temples from the outside or watching the devotion from inside, the sacredness fills the town. It’s even more evident at the lake. Pushkar Lake is a gem. It is surrounded by 52 ghats or holy bathing steps. It can take at least an hour to walk around the lake, especially if you don’t have a guide to keep you from getting lost. While tourists don’t typically immerse themselves in the water, it’s a beautiful space to soak up the spirituality of age-old customs. And, say a few prayers of your own.