Expats: Life in the Promised Land 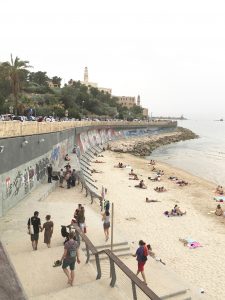 Most Americans say this is the greatest country on earth. Yet, last year, a record number of Americans became ex-pats. According to some statistics, there are now 7.5 million Americans living abroad. The numbers have been skyrocketing, for many reasons.

For several decades, it hasn’t been all that uncommon for Americans to retire to Mexico.

With globalization, people have been moving beyond borders, and at an earlier age, for work opportunities, a better work/life balance, or to stretch their greenbacks.

However, there’s another segment of the population that leaves their birthplace. It’s not about the sun or sand. It’s not to safeguard dollars in a foreign bank.  It’s not for a better job or to stretch their dollars. They move because of a personal commitment … to the promised land.

In 2014, nearly 4,000 Americans and Canadians left this continent to make aliyah (adopt Israel as their home). Despite all the troubles in the Middle East, that figure was 7 percent higher than the prior year.  Israel’s newcomers were of all ages. Babies. Young adults. Mid-lifers. Even a 98-year-old.

According to YNETNEWS, “2014 saw a 10% increase in lone soldiers who make aliyah without immediate family, who joined some 3,000 lone soldiers already serving in the IDF.”

Larry is one of those “lone soldiers.” After graduating high school, he opted for a gap year. He enrolled in a university in Ramat Gan, near Tel Aviv, after which, he committed to another three years in Israel. This time, with the Israeli Defense Force (IDF).

It was a very personal decision for him. Just 20-years-old, he pledged to “make a difference in the world.”

The son of an Israeli mother, Larry spoke Hebrew and had made frequent, extended trips to Israel since he was a toddler. “We are definitely supporters of Israel back home,” he said.  “I wanted to support, hands-on. To be part of something big.”

His decision wasn’t about materialism or ego. “I felt part of Israel, and wanted to do my part in the IDF,” he explained. “I believe in Israel’s right to exist, and that is what the IDF stands for and that’s why I’m here.”

Joining the IDF can be dangerous. It can be hard work. Gil never knows when he’ll have any down time to visit with family in Israel, or in the States.  He doesn’t know if he’ll stay forever, or return to the states. But he knows it’s the right place for him to be, now.

Like most that uproot themselves, it’s hard to leave family behind. Gil admits that he misses family and friends the most when he’s in Israel. “But when I’m in the U.S., I also miss my family and friends (who have become like family) and the Israeli lifestyle and culture and mentality and the connection I feel here.”

About the other “lone soldiers”, Gil surmises that they leave their homes to move to Israel, because “they feel more connected here, be it because of the religious aspect or the Israeli culture.”

Bram and his five children all served in the IDF. His youngest son was a medic in the last war in Gaza. He lost three good friends and is just now coming to grips with this.

Nevertheless, Bram says, “Israel is safer than any city in America.  Safer than most other countries in the world. Our violent crime and homicide rates are only a fraction per capita than the U.S. and most of Europe. If you add to that number, terror and war stats, we are still safer than any U.S. city or most EU cities. The news and anti-Israel propaganda paints a different biased opinion.”

Bram was only 14 when he felt drawn to Israel.  He was traveling with this family.  “One of the sites we visited was Yad Vashem, the holocaust memorial, and I was moved to trembling and awe at what our people went through,” he recalled.  “I made a pact with God and with myself. I would live in Israel to honor the millions of lost lives and the promise of God to ‘gather up his people and bring us back to the land promised us.’”

In 1984, Bram made aliyah. While admittedly, life is not as easy here as in the States, he doesn’t look back. To others, he says, “Follow your heart.”

Davida, like both Bram and Gil, followed her young heart. She moved to Israel before she even reached voting age.

“I was attracted by the thought that I was a majority finally, and not part of a minority.  It felt good to look around and know everyone was a Jew, like me,” Davida said. “I was tired of having been picked on by my Christian neighbors and schoolmates.  I liked the fact that people care about you more, are more open and friendly.”

After 40 years, living in Israel, she still relishes everything the small country has to offer.

“It is so full of everything: geography, history, nature, people, culture … and in my opinion, the best cuisine and spice usage since it has the influence of all cultures again. We have more fun here too, all of the holidays, family togetherness, the best weddings.”

Davida makes her own pita and grows much of her own food products. She has dozens of farm animals on her moshav (agricultural co-op), and she is always close to nature.

“I love my farm and the view around it,” Davida said. “I love the drive down south to Beer-Sheva and then down to Eilat through the desert.  I love the greenery in the middle of the country and of course the sea.  My favorite city is probably Jaffa with the port and the feeling of history and antiquity there. I love the north, in the winter, close to the Golan Heights, I love the Kinneret (lake) also.”

Marcelo chose to migrate to Israel after working as a correspondent in Washington, D.C. for more than 20 years.  Being the journalist that he is, he was very diligent in his advance preparations and research. He met with social services organizations, and also studied conversational Hebrew to supplement what he learned as a young boy in Hebrew school.

Originally from Argentina, he is multi-lingual and appreciates different cultures. He finds Israel very welcoming for Latin Americans, as the people tend to be informal and warm. He also likes multiple genres of Israeli music. Among his favorites are A-WA, Yemenite Jewish sisters who sing in Arabic, and Tamouz, retro rockers.

Little things that are big pluses for him in Israel include the used CDs and record shops, and falafel stands in remote bus stations. Special places within the country for Marcelo are the Negev desert and the Western Wall.

“Israel is a very intense, interesting place, with plenty of conflict and ambiguity,” he says. “I think you can call it a journalist’s paradise. Besides that, I like the food, the women, the language, and the proximity to everything Middle East.”

As Davida sums up, there’s something for everyone in Israel.