Exotic Blooming in the Desert: Orchids in Landers, Calif. 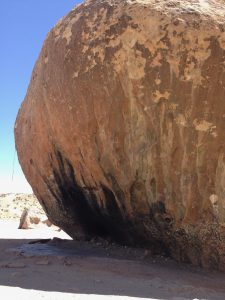 People come to the Californian high desert for the silence. The sparse scenery. Sand and clay-colored landscape everywhere. Tranquil and serene, the Joshua Tree area is thankfully absent of many things. No skyscrapers, traffic jams, fast food joints, or sprawling shopping centers (although there is a Wal-Mart and Home Depot in Yucca Valley).

People that head here, typically, do so to convene with nature. Joshua Tree National Park is a treasure. The park is perfect for hiking, camping, and disconnecting.  That is, going beyond the reach of your cell phone tower. Others may convene with other worlds. This part of the high desert is considered mystical, by many. It’s popular among spiritual seekers, as well as for those seeking UFO sightings. However, amid the beige, brown, and rusty hues that carpet the region, it’s a rare sight to spot colorful flowers and lush gardens.

Nonetheless, hidden among the cacti and mountains is an oasis for flower lovers. Seemingly off-the-beaten-path, just a third of a mile from the UFOlogist-designed Integratron, is Gubler Orchids. Yet, for more than 20 years, people have flocked to this spot in Landers, California for the Morongo Basin Orchid Festival.  The 2019 benefit festival and judged orchid show took place October 5 and 6.  Beyond the incredible examples of the exotic flowers, the 2019 festival included live music, food and beverages, and even fireworks. If you don’t want to wait till next October’s festival, Gubler Orchids is open Monday through Saturday from 10 a.m. to 3:30 p.m. for greenhouse tours.

To some, it may seem as if the exceptionally diverse samples of tropical orchids were placed in the middle of this desert by extraterrestrials.  According to Gubler, however, there’s a reason why the greenhouse has such a lovely sampling of orchids that may be native to Borneo, the Philippines, or Colombia.

“The extra sunshine builds a high sugar content in the leaves and the humidity can be set to optimum levels.  We also use fresh groundwater which comes directly from wells on our property.  This great combination allows us to grow orchids that are much heartier than those grown in other environments, thus making them transition better from our nursery to a retailer, and ultimately, your home.”

Gubler Orchids is a family-run business. The Gublers were in the orchid business in Switzerland, dating back to 1918. In 1954, one of the sons moved to California and began selling orchids from his station wagon. Today, the grandchildren run what is now one of the largest growing orchid nurseries in southern California. Tourists head to Landers where there are 43,000 square feet of orchids, including some that are carnivorous, in six greenhouses. Additionally, the Gublers have another 80,000 square feet for the bulbs (not open to the public) in Lucerne Valley, about half an hour northwest of Landers.

Landers is about an hour from the Palm Springs airport, an hour and 40 minutes from the Ontario airport, and several hours from LAX.