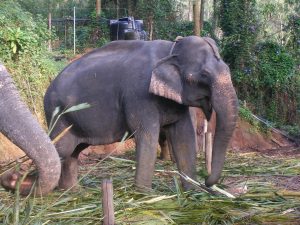 To many, I’m an animal activist. To me, I just don’t believe in the senseless hurting of animals. That means no fishing, no hunting, no eating animal products, or purchasing leather products when I travel.

Now, something new for my list: Do Not Ride Elephants. This, after I toured an elephant sanctuary in Mathura, India that Canadian Prime Minister Justin Trudeau visited.

Wildlife SOS opened the sanctuary in Mathura in 2010 in response to the dire need to protect, rescue, and rehabilitate elephants in India.

Our Wildlife SOS guide made it clear that elephants should not be toys or photo opps for tourists.   Thanks in part to Wildlife SOS, the Indian government has passed laws to protect the animals. But the role of the tourist is crucial. Laws can’t reverse cultural attitudes and practices overnight. As more tourists become aware of the inhumane treatment of the animals, there will be less of a demand for the animals in captivity.

As a result, the role of Wildlife SOS goes beyond rescuing and rehabilitating the animals. Wildlife SOS continues to lobby the government to protect the animals and educate tourists, and the Indian community about abusive animal practices.

Wildlife SOS has a display of “training tools.” The items on display were commonly used methods to inflict torture on elephants. This form of animal abuse is against the rules of nature, our guide told the visiting tourists. No elephant weighing thousands of pounds should be subservient to a 140-pound man.

Humans have encroached on the elephants’ natural habitat and patterns. At one point in time, “The whole of India was for elephants,” said our guide. “Now, it’s just patches,” with six out of every seven elephants being captive.

Unfortunately, once elephants are captive, they cannot be released back into the wild. They are social animals, but in captivity they are isolated.  Once out of their normal healthy environment, they can’t readapt.  “It’s like a slavery industry,” explained our guide. “These are wild animals. They should never be in the human world.  We are trying to give them as much space as possible (at Wildlife SOS).”

The life expectancy of a healthy elephant, in its natural environment, is similar to a human. 60 to 70 years.

All 21 elephants at the Mathura Wildlife SOS sanctuary were rescued from unhealthy, inhumane environments. They were all in a critical state when they arrived. Emaciated. Wounded. Physically and emotionally.

Wildlife SOS provides veterinary care, proper nutrition, and positive attention which was often sorely lacking. Additionally, the staff encourages socialization between the elephants. Several of the rescued elephants are typically partnered with their best buddies.

Before and after pictures of the elephants are posted near their feeding zones. Reading the explanations accompanying the before shots should convince most any tourist to never ride an elephant again. Or, contribute in any way to the commercialization of captive animals.

Kalpana (pictured here taking her first steps at the animal hospital)  is the newest rescue. She was mistreated for nearly 40 years. She was eating the dirt and mud surrounding her until Wildlife SOS’s ambulance transported her to their animal hospital. The ambulance, the first of its kind in India, was packed with watermelons, pumpkins, and sugarcane to nurse the blind, dehydrated, injured animal back to health. elephant

Feeding and caring for the animals is not a simple or inexpensive feat either.  Elephants consume up to 600 pounds of food and 50 to 100 liters of water daily.  Even in India, that adds up to $30 a day to feed an elephant, plus another $30 a day for medical treatment and care.

Wildlife SOS was established in 1995 to rescue dancing bears from captivity. Dancing bears was a 400-year-old practice. For many, the culture and financial needs kept these bears in captivity. In 1998, the practice was banned. However, the former dancing bear owners needed to find new ways to support themselves and their families. Wildlife SOS helped in that area as well, by funding new start-ups for them or putting them to work making handbags. Today, India is free of dancing bears.

Wildlife SOS has expanded to 11 centers across India. Among them, six are for bears and one is for leopards. One bear facility, just 15 kilometers from Mathura, has 159 bears.

Wildlife SOS USA, a 501(c)3 has a fundraising office in Salt Lake City to support the high costs required to provide the appropriate care for all the animals.  Tourists can help support Wildlife SOS’ initiatives by visiting and supporting the centers, their cafes, and their gift shops, or volunteering on-site for a minimum one-week commitment.

For those not planning a visit to India, they can sponsor an animal, make a contribution online, or buy elephant print harem pants, tie-dyed scarves, sloth bear printed bags, and other items from their online gift shop

Possibly of even greater importance, everyone, anywhere, should refuse to ride elephants.