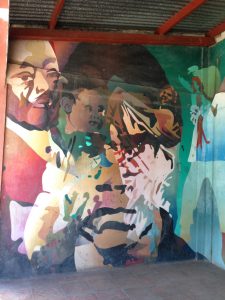 I’m a big fan of mural art. I grew up in Chicago, and loved the vibrancy and messages in the street art, there. I now live in San Antonio, Texas, where we have a bevy of street art, too. So, I jumped on the opportunity to do a mural art tour in Estelí, Nicaragua.

Murals are a great way to view the community that you’re visiting.

For example, Nancy Burdman Katz, an art historian who has served on Illinois arts entities says, “Chicago murals provide a glimpse into the heart of the community. The Chicago Mural Project visually interprets what is important to a neighborhood:  its children, its schools and colleges, its parks, its architecture, and its overall cohesiveness.”

Estelí was an important city during the Nicaraguan revolution. So, images and ideals reminiscent of the revolution are pervasive in much of the street art.

It would be a fun challenge to map all 300 murals in Estelí, and color code by subject matter. However, for a nominal charge, a non-profit, TreeHuggers, will guide hour-long walks in English or Spanish.  The mural art tours depart from Café Luz, a vegetarian-friendly restaurant and coffeehouse, twice a day, so it’s easy to coordinate with your meal or bring a drink.

My guide explained that there are four primary entities responsible for creating all the colorful works on the walls. About 20 years ago, the Casa de la Cultura created its first mural and has since been a breeding ground for creativity throughout the city. We went inside the government-run cultural affairs office to see the breadth of arts and culture that are groomed here. And, to take a look at a number of murals and other art. There was even a black and white photo of Daniel and Rosario (Nicaragua’s President and VP) from their early Sandinista days.  Given the history of Nicaragua and the traditions of murals, it’s not surprising that most of these works support political messages or public informational campaigns.

FunArte
is another of the main mural makers. The non-profit was created 25 years ago to spread creativity among children and to sensitize people to social issues. They have volunteers from all over the world, whose marks may be reflected in some of the paintings. Like the Casa de la Cultura, FunArte uses art to promote messages, oftentimes related to the environment. Some messages are obvious.  Others are more subtle, like using glass bottles to tell the story.

Sonati is another non-profit that works with youth to communicate positive social messages through mural art. Under the direction of talented artists, school kids design and paint murals throughout the city. Sonati also encourages awareness of the environment, and re-uses materials in their murals, like bottle caps.

Appreciating the mural art goes far beyond the images on the walls.

Michele Casella Brinkley, a retired public school educator and current projects coordinator of Jump-Start Performance Co., says, “Truly, when children and young adults participate in the creation and installation of street art, they are provided with the essential foundations of character education and service-learning. They also engage in various elements of academic curriculum, by learning about design, color and shading, perspective, scale drawing, storytelling, and history and culture. By participating in street projects, young participants hear and re-create the stories of legends and heroes, and cultural giants of the communities in which they live. Collaborating with others and completing something big and beautiful and colorful inspires a sense of inclusion and selflessness in children.”

Interestingly enough, a company founded by two American guys is helping to create colorful walls in Estelí. Not in line with the political, environmental or social/health/welfare messages frequently seen in the town’s murals, Drew Estate’s are fun, bold, and graffiti-esque. Drew Estate is one of 70 cigar manufacturers in Estelí.

Most people head to Estelí for outdoor adventure travel. Somoto Canyon is on the way to Ocotal, and Tisey Reserve and Estanzuela Waterfall aren’t too far away.  Finally, Miraflor is a natural reserve that sits in the mountains overlooking Estelí. Café Luz’s travel office, TreeHuggers, can coordinate guided tours to any of these places, including homestays with the campesinos that live in the mountainous protected areas. They also offer short visits to a cigar factory. TreeHuggers aims to create employment in Nicaragua, and all profits are reinvested in the communities in which they serve. In addition to the restaurant, two hostels, Luna and Puro Estelí http://hotelpuroesteli.com, are affiliated with TreeHuggers.

Estelí is 148 kilometers north of Managua, 166 northwest of Granada, 141 northeast of Leon, and just 78 southwards from Ocotal, Honduras. There are two bus stations in Estelí, Cotran north, and Cotran Sur.

Café Luz, Luna, Puro Estelí, and TreeHuggers are all located just a few blocks north of the main square.