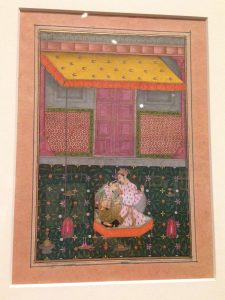 Austin’s Blanton Museum of Art is offering up a taste of ancient India, through October 1.

Epic Tales from Ancient India: Paintings from the San Diego Museum of Art at the Blanton, is more than just paintings.

There will be a sarod and tabla concert on September 21. Arnab Chakrabarty is one of the youngest world-class sarod players today, while Pandit Sanju Sahai is a tabla player with an impressive musical lineage.  Both are U.K.-based musicians who will lead lectures/demonstrations the following day at the Blanton.  Additionally, each Thursday, Saturday, and Sunday, through October 1, an artist-in-residence will perform Bharantanatyam Indian classical dance. Ethnomusicology grad student Aruna Kharod has practiced traditional Indian dancing for ten years. She will enact the stories, via dance, something appropriate for people of all ages to enjoy.

For those wanting more in-depth knowledge of Indian lore, the epic film, Mahabharata will be screened on September 15.

Many of the characters in the art exhibit are part of the Mahabharata. One portion of the gallery space reflects musical illustrations from the 16th and 17th centuries known as Ragamala.  Another area is dedicated to paintings from India that were based off of Persian literature in India. In particular, the Shahnama (Book of Kings) was very popular. Other sections of the exhibit retell traditionally recognized Sanskrit stories such as those from the Ramayana, and the Bhagavata Purana.

As such, this exhibit gives a view of different cultural and religious beliefs and traditions dating back to ancient times in the Indian sub-continent.

The following are just a few illustrations that come to life in the Blanton exhibit along with snippets from the gallery explanations. Most are very detailed, almost miniatures, watercolor with gold, on paper.

According to the ancient texts, Krishna is an incarnation of Vishnu. His birth parents (Devaki and Vasudeva), handed him over to Yashoda and Nanda to protect him from the demons in a prophecy.  Oftentimes, he’s depicted as a young boy with blue skin, jet black hair, and eyes, wearing a breastpiece and carrying a flute. Krishna’s birth, and escape from the jail where he was born, are expressed in a watercolor circa 1560. The exhibit description explains several of the scenes in this piece.

“When Devaki gives birth to her eighth son, Krishna, no ordinary infant, but rather an incarnation of the god Vishnu, a carefully conceived plan ensures the child’s safety.  In this image, the blue-skinned Krishna sits on a lotus throne…At the center, the prison door is left unchained. Its two guards and their dogs have fallen fast asleep, enabling Vasudeva and Krishna’s midnight escape to the distant land where Krishna will be raised.”

As part of the plot to harm baby Krishna, demons pursue the escaped boy. One is disguised as a crane, Bakasura.

“Bakasura attacked from behind a tree, capturing Krishna in his beak, In the story, the crane swallows Krishna but is forced to expel him when his palate begins to burn…Krishna seizes the two halves of Bakasura’s beak to rip the crane into two pieces as his brother, Balarama, and another cowherd boy wield their sticks to assist in subduing the demon.”

In another tale, Krishna overcomes a forest fire. After defeating a serpent, Krishna and his father return home. Tired, they fall asleep at the Yamuna river.

“At this point, a massive forest fire starts, and Krishna must rescue his people again. In the illustration, the fire that encircles the group looks like a garland of yellow flowers, within which Krishna is depicted twice…On the left, he sleeps alongside his brother Balarama and foster father Nanda…On the right, he drinks up the flames…”

An opaque watercolor, from the mid-1700s shows Krishna explaining worship. There are multiple stories within the painting, representing how worship is passed on, from one to another. At the core of a beautiful flower, are Vishnu and Garuda. His attendants and other deities are pictured on the petals.

Krishna was ever popular among the gopis (cow herder girls). A gallery text explains one of the pieces from around 1690.

“A telling of the story in the vernacular language of Brajbasha on the verso describes Krishna as sitting among the gopis as they together form a circle and enact the rasalila performance. Krishna multiplies himself and dances between the women. Witnessing this wonderful spectacle, gods gather while heavenly musicians and dancers join in the revelry.”

The Blanton was founded in 1963 as UT’s Art Museum. The current complex is located on MLK Boulevard, just north of central downtown Austin. Other galleries are dedicated to art of the American West, Latin America, Greek and Roman art, and Native American art.

Admission is free to current UT staff and students, as well as for active military and teachers. Open Tuesdays through Sundays, admission is waived, for all, every Thursday.