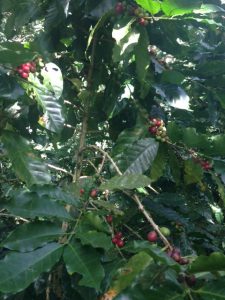 Estelí
is a booming bustling urban center in Northwest Nicaragua, with a population hovering around 100,000. It is a stopping ground from which to explore beautiful nature and rural communities. This is coffee country, among other things.

Highlights for eco-tourism fans include Miraflor, a refuge from urbanization, where nine coffee co-ops are nestled in the mountains.  All yield certified organic, fair-trade beans sold primarily to Germany and the U.S.

Miraflor is a protected region of 54 agricultural communities spread across 200 square kilometers. While it may look close to Managua on a map, it takes about four hours to get from the capital city to Estelí. From there, you need to take a bus, four-wheel drive or motorcycle uphill. If you take the bus, as most tourists do, depending on weather conditions and how far you’re headed, allow anywhere from 30-minutes to two hours, to get to your destination, even if it’s no more than a 10-mile jog.

It’s best to hire a guide from the non-profits, Treehuggers or the Unión de Cooperativas Agropecuarias (UCA). English- or Spanish-speaking guides can escort you to your homestay, coffee fields, or look-out points.  There are no signs, and the guides veer off the road to take a myriad of shortcuts.  For a nominal donation to either non-profit, the guide will meet you where you get off the bus. He’ll trek through the fields (by foot or horseback), opening and closing farm gates, and even help you from slipping in the deep mud. And, talk to you about life in this pristine territory.

What a deal. Actually, every penny anted up through the non-profit tours will yield plenty of dollars in experiences. If you opt for a home stay, the tour operators will do their best to pair you with a family that will likely be most compatible for you, with language skills taken into consideration, too.   Wherever you stay, you will be treated to a hidden getaway for peace and tranquility and freshly roasted coffee. This is a wonderful way to understand, learn from, and bond with, the locals.

There will be no distraction from televisions, computer screens, traffic, or sound pollution. Maybe a bit of music will waft around on Sundays from the churches’ community member-led sermons, songs, and prayers.

Second to mass, the next largest gathering maybe coffee harvest. The area is verdant with dense untouched forests of pine and oak. In the community of Sontule, there are three coffee plantations sitting in a row.   One is run by women. Another, just men. The third is mostly, but not exclusively, men.  The entrance to all three is off the main road.

If it’s not harvesting time, you and the guide may have the plantations all to yourselves. Hear about the inner workings of the coffee co-op. Sit and relax. Take in the beauty of the area. See where the beans are separated and sorted. Note where the coffee waste is re-used.

Like the story of Finca La Magdalena in Ometepe, these fields once belonged to wealthy landowners. Now, they’re of the people. UCA clarifies, “All the co-ops organized after the Nicaraguan revolution (1990), but not all the lands were split up (among the workers)…”

Don Rogelio belongs to the men’s coffee co-op in Sontule. He is an example of someone who benefited from the expropriation of lands. Now about 70, he and his wife, Lucia, have lived in these mountains their entire lives. As children, they worked the fields, like indentured slaves. Today, they still have no traditional benefits that one gets from contributing to a pension plan or social security. They labored, more than most. But there were no paper trails. No employer-filed documents.

As a result of the revolution, Don Rogelio was granted 12 manzanas of land. Today, he has a nice piece of personal property with cows, chickens, pigs, and goats. Plus, he’s part of the men’s coffee-growing co-op. No easy ride, it took him ten years saving his earnings from the co-op to be able to afford his own property.

Lucia belongs to the women’s coffee co-op. Despite having worked in the fields from the age of 14, she didn’t benefit from the revolution’s re-distribution of land.

Decades after the Sandinistas won the revolution, through the financial assistance of a German company, she and a group of other women were given a loan. They bought the land that is now the women’s coffee co-op. All the women make joint decisions as to the operations of the small co-op. It has a feel of a cottage industry. These are not cash cows. Life in Miraflor is not easy, but it has many benefits.

Don Rogelio and Lucia wake up around 5 a.m. to grind corn and hand shape the tortillas for the day. Lucia prepares a huge pot of coffee that she fills into three or four large thermos containers, while Rogelio shucks the corn for tortillas, and picks the bad ears that he’ll give to the animals.  They drink coffee throughout the day and at night. Everything is done on their fire-burning stove, with natural light peaking in through the windows, doors, and crevices in the ceiling. No Mr. Coffee or Kreps machines here. Coffee is toasted and ground in a hand-wound mill. Then poured into a large ceramic vat to heat.

Eco-tourism, in Miraflor is a beautiful way to learn about the local communities, infrastructure, and how agricultural co-ops work in Nicaragua. These experiences help you to appreciate our environment and the lives of those who work the land. Plus, spending your money here (not much) goes a long way to buoy the local communities.

Another way to contribute is by buying coffee from one of the nine Miraflor coffee co-ops. Fundación Entre Mujeres (FEM) is an NGO that created the first female-only co-ops in Nicaragua. FEM works with agrarian women and markets their products under the brand, Las Diosas (The Goddesses). Based out of Estelí, just 80 meters south of the Mirador tower, visitors can buy coffee, wine, herbal teas, and other products at the FEM office.

According to UCA, 15 percent of the Miraflores’ economic livelihood comes from tourists.

“EcoTourism has helped the personal development of the residents of the Sontule community. These changes have been significant over the years. In fact, when tourists first began to visit the region, the residents were very reserved and withdrawn. Now, there is a tourist-friendly state of mind and the engagement between the tourists and community members is routine, with a smooth flow of two-way communication. With regards to the economic development, the community has benefited…through the community-led sale of eco-tourism services including meals, lodging, and guided tours.”