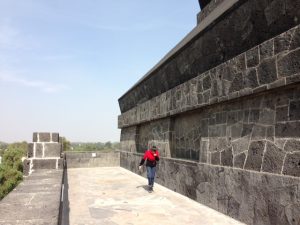 Diego Rivera is best known for his murals with a message.  His larger-than-life-size paintings were commissioned by the Mexican Government, Henry Ford, the Rockefellers, and the San Francisco Stock Exchange Building, among many others. His life was almost as big as his art. Anahuacalli, his last home, was also sized to fit the man.

Visitors to Mexico City frequently traipse through the Casa Azul in Coyoacán that was Frida’s family house, before Diego and Frida shared the space. Others may recognize his-and-her homes he shared with Frida in San Angel. Anahuacalli, which in Nahuatl means house in the valley, was his dream home.

Almost a 30-minute drive from La Casa Azul, it sits on the southern end of Coyoacán and has a view of the city. Now a museum, you get a glimpse of far more than his artwork here. For those fortunate enough to visit Anahuacalli, and take a free guided tour, they’ll learn about the many faces of Diego Rivera.

“Believe me, I’ve never seen anyone build with so much joy and enthusiasm,” Frida said about Diego, the architect.

Diego bought the 46,000-square-meter parcel in the 1920s. Originally, he wanted to till the land, but it was too swampy. So, he created space for his beloved collection of idols and a resting place for Frida’s ashes. However, he died of bone cancer just three years after Frida’s passing, before Anahuacalli was completed.

Diego consulted with Frank Lloyd Wright and Juan O’Gorman on the Anahuacalli complex. His connection with Wright may have partly been due to their shared love of connecting structures with the environment. “When art is true, it is one with nature. This is the secret of primitive art and also of the art of the masters—Michelangelo, Cézanne, Seurat, and Renoir,” he once said.

His connection to O’Gorman was more personal. O’Gorman was also a painter and architect. Born in Coyoacán, near Frida, Architectural Review called O’Gorman “the most Modernist of Modernist architects.” O’Gorman’s paintings are well known, and perhaps his best-known piece of architecture is the UNAM library in Mexico City (pictured here), covered with thousands of mosaics to form mural art.

In 1932, O’Gorman designed the San Angel double house that Diego and Frida shared. Ten years later, Diego called on him to supervise the building of Anahuacalli.  Rather than the modernistic look of the O’Gorman house with the catwalk, Diego wanted something reminiscent of his roots — and his persona. Big. Bold. Heavy. Impressive. Indigenous. Revolutionary. Dualistic.

The structure, and its relationship to the grounds, is impressive. The home is built entirely of volcanic rock from the same terrain on which it stands.

Another surprise, for many, is that Diego was a twin. His brother, Jose Carlos, died before his second birthday.  As a result, Diego was fascinated with dualities. We see them in his murals: the U.S. versus Mexico, Indigenous and European, modern with traditional, capitalism and socialism, progress for betterment juxtaposed against inventions that destroy.

Photographs and self-portraits of Frida often show her with esquintles, tiny hairless Mexican dogs. According to the Anahuacalli tour guide, esquintles are born as twins, which was another reason why the Riveras had a fondness for them.

Dualities are part and parcel of Anahuacalli. The first floor is very dark, heavy, and oppressive. With each subsequent level, it feels lighter in color and atmosphere. This was deliberate. The dark cold represents the underworld. The light reminds us of the heavens. In some areas, you will see two serpents facing each other, which also represent dualities, such as day and night.

Each of the four corners of the house represents compass points, as well as a different element and its polar opposite, and their respective indigenous gods: earth and air/wind, fire and water.

Sapha Arias is a Houston-based yoga instructor, born in Mexico City. She understands Diego’s fixation on dualities. “Everything in the universe is made up of dualities: light and dark, good and evil, female and male. The balance between the two is of incredible importance within our lives. It is crucial to understand as we look at the realm of duality that one side of the coin does not nullify or further exceed the other, it simply balances and mirrors it in reverse.”

One of the dualities of Diego was his ethnic makeup. Like so many Mexicans, he had both European and Indigenous roots.

Diego began collecting pre-Columbian artifacts when he was a kid. He scavenged them at construction sites, long before the Mexican government began sending archaeologists to search for important remains. Guadalupe Marin, his wife before Frida, once complained about his idols. She felt he squandered all his money on what she called “monkeys.” To illustrate the point, when she had no money for food, she once served Diego a dinner plate with one of his idols sitting on it.

In the end, he had amassed 49,000 pieces, which required a larger living quarter than either the Casa Azul or the San Angel Casa/Museo.

Anahuacalli showcases Diego’s love for the indigenous culture, traditions, and structures beyond his gods. The complex resembles Teotihuacán in that each building constructed out of volcanic rock has a tablero slope and step structure, and the buildings surround a large flat patio. Diego also built a tablero style chimney at the Casa Azul. The stairs at Anahuacalli are replicas of those at the pyramid at Palenque.

He preferred lava, in part, because it resembled “the blood of the earth,” and when dry, was like the entrails.  In the main building, Diego created mosaic ceilings which he learned from O’Gorman. Those also reflect his love for his roots. Beyond the Indigenous, one ceiling reflects a toad, which was his nickname (sapo) and representative of his hometown, Guanajuato.

Armando Olivares Carrillo said, “Diego has done what no other artist in the world has attempted. He narrates the history of his town.”  Anahuacalli narrates the history of the Indigenous peoples. Just as each corner of the house represents an element, it also correlates to one of the Indian gods, such as Tlaloc the rain god. The ceiling, with a spout, represents the wind god (Ehécatl) scattering seeds.

Diego himself, said “The secret of my best work is that it is Mexican.  I return to the people what artistic heritage I could rescue of their ancestors.”

Diego’s work, at Anahuacalli, or anywhere else, offers great history lessons to those that listen and look.