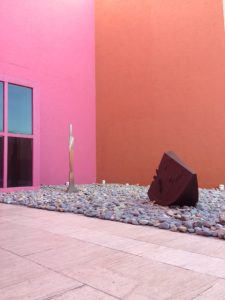 I’m a culture nerd. I’m also a bean counter. I try to make my dollars count…and my time. When I had a layover in Chennai, India, from 2 a.m. to noon, rather than snooze or read at the airport, a driver picked me up at 4 a.m. and escorted me to temple after temple.

During one west coast getaway, my sister commandeered our rental car to a mall. She knew I would never head to a cookie-cutter mall unless my MacBook needed repairs.  In my mind, that’s a waste of time…and money. Customs officials have given me some stares when I declare less than $20 worth of purchases. So, the money and time clock pro recommends: When in Monterrey, Mexico, queue up for culture.

If you can’t go cold turkey from shopping, there’s a flea market winding through the streets of the funky Barrio Antiguo. There are handmade items nestled along with vintage everything. It’s great for people-watching, too.

For the history buffs, there are almost a dozen historical sites and museums in this city. My favorites are the glass museum, and the old foundry, both of which sit in the former factories that helped shape Mexico, figuratively and literally.

One of the beauties of visiting museums is that even if you’ve been there before, there’s always something new to see. Or, you may see something from a new perspective.

Monterrey’s Museum of Contemporary Art (MARCO) sits in a colorful building easily recognizable as a creation of Ricardo Legorreta.  Legorreta is responsible for the San Antonio Public library, the Latino Cultural Center in Dallas, and several Camino Real hotels in Mexico.

The LA Times, said of him, “He was a regionalist whose photogenic and widely published projects made him well-suited for worldwide fame.”

If being inside a building for eight hours isn’t your cup of tea, head to the Santa Lucia River Walk area. You can bike, stroll or jog by fountains and sculptures, and then head into one of three museums at the Paseo’s westernmost end. Just across the main drag from the three museums is the Judicial Palace.

Soak up the fresh air and a view of the city at El Obispado. The cerro (hilltop) houses what was at one time a military fort, then a quarantine center, and at another time a cabaret. Today, it’s a history museum.

Kids can have fun at the Alfa Planetarium, at the puppet museum, or at an entire kids’ complex at Fundidora Park.

Finally, for humanists, there’s a Movimiento Social exhibit that launched across the park from MARCO at the Metropolitan Museum.

Bright, energetic university students guide you through this interactive exhibit. The free tours last 60-80 minutes, depending on how many questions you ask your multiple docents, and how long you play in the different rooms.

This is a very well-thought-out exhibit. There are no pretty pictures here. There are deep quotes from Malala.

Statistics and bar graphs about the impact of education on someone’s lifeline in another room.  It’s meant for you to reflect. It’s made to make you think, and make a commitment to making a difference, starting with yourself. This is a campaign, a battle cry, a wake-up call. It leaves a mark on the visitor so that hopefully, more people in Mexico will be able to cross social boundaries, and each generation will be better educated, and as a result, healthier and happier.

Even though I may not have a purse or jacket or earrings with any of these images, they still stay with me wherever I go.

For more on Monterrey, read prior blogs.