Costa Rica: Eco-tourism For The Birds 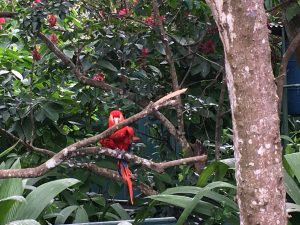 Costa Rica has a population of less than 5 million, yet welcomed 2.6 million tourists in 2015. Almost one-third of the land is protected, and you don’t have to go too far to find eco-reserves. There are 27 national parks, 58 wildlife refuge centers, and 32 protected zones that reach from inside the borders with Nicaragua to Panama.

Costa Rica is among the top five favorite countries for bird watchers.  As a result, the National Bird Route was created here last year. Already, 30 percent of visitors participated in group bird watching or dolphin tours.

Just about 90-minutes south of San Jose, and 40-minutes north of Jacó beach is Carara National Reserve.  It’s a favorite for bird-watching. For those that don’t know anything about birds, hire a guide. They carry binoculars, telescopes, and even a phone app to call birds.

\On my visit, I’m sharing the hired guide with a professional birdster from Peru. He has even more equipment than our leader. These guys can recognize a male bird from a female by their calls. They have an almost sixth sense of where their feathered friends are hiding, and their origins. They throw around the names of these birds (in English) like they’re chatting about a recipe.  Long billed hermit.  Rufus cat warbler, a non-migratory species. Tropical gnat catcher. Turquoise brow mutt mutt (the national bird of Nicaragua). Long tail mannequin. Ruddy tail flycatcher. White whisker puff bird. Blue jay patrolmen that squawk in times of danger.

Most TripAdvisor commentaries recommended hiring a guide. It’s $25 per person for a two-hour tour, maybe longer. On my day in Carara, it’s just me and the Birdman from Peru, following our local leader.

I’m enthralled with the forest. The greenery everywhere is spectacular. The tree roots and vines are amazing. As far as the birds, yeah, they’re cool. But if I wasn’t with my guide and the Peruvian Birdman I may never have spotted a single one. It’s hard enough for me to catch a glimpse through the telescopes. The birds fly very high in the trees. Some are very small. We’re not talking about eagles or vultures. Plus, they don’t stay very long, and one of my goals is to snap some shots through the telephoto lens.

Birdman doesn’t have forever to walk in the forest, because his wife is waiting in the car. She didn’t bring repellant. Apparently, she is afraid of bugs. At the same time, she must not be concerned about them flying in through her car windows. After Birdman leaves, my guide picks up a bit on my interest in the forest, versus the birds.

He explains that this is a transition forest, where the dry and wet climates convene. As a result, there are species that represent both environments. Furthermore, there are some 14,000 species of butterflies and 2,500 of those are around in the day versus the others which are nocturnal.  Finally, Costa Rica is home to six species of toucans, all of which are omnivores.

I’d venture to say, that like the Birdman’s wife, most of us aren’t fans of spiders. However, these forests boast the most beautiful webs I’ve seen. They’re huge. Some are glistening with dew. Some are called golden threads. They are strong enough to be used, synthetically, as sutures.

Carara’s canopies are incredibly lush. As a result, plants are struggling to survive.  They wind up tree trunks and branches forming beautiful spiraling patterns in nature to catch some sun rays.

“Life in the forest is very hard,” says the park guide. Trees grow 160 feet high to try to get some sunlight. “They sacrifice different things,” he adds, “like flowers or fruit.” Forest papaya is one of the few fruits that grow here. Our escort says that transplanted fruits will not grow here. They must be native, like cacao.

The trees are so impressive. Many are 350 years old, while the same variety can easily live 600 years, in proper conditions.  The ceibas are my favorite. These are the national tree of Guatemala.  Although they seem so healthy and strong, our guide stresses that it’s a dog-eat-dog world for many.  “Life span is considered very short here,” he says, in talking about the forest life. Others develop huge leaves to absorb the sun. Even the centipedes have their way of surviving, but emitting a bad small, when in danger.

Carara is accessible via public bus, taxi, private tour guide or rental car. Additionally, Carara was the first national park that was wheelchair accessible. That said, there can still be muddy spots and large stones on the pathways. The park opens as early as 7 or 8 a.m. For more information, visit http://costa-rica-guide.com/nature/national-parks/carara/. Many may want to combine Carara with an alligator/croc tour. Both are just outside of the town of Tarcoles.