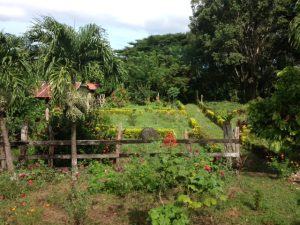 Coffee. You sip it. It warms up your belly. The aroma wafts around you. Once inside your system, it gives off an energy boost. No wonder people drink it with gusto, every morning — afternoon — and evening.

For six years, the closest I got to caffeine, was catching some sniffs. Hazelnut. Cinnamon. Mocha. Vanilla. Every now and then, I’d indulge with a decaf topped with unsweetened almond milk.

So if I broke my caffeine-free lifestyle, recently, I’ll blame Nicaragua.

In 1999, I was in Managua for just a few days but managed to stuff my suitcase with coffee on my way home. Literally. There was pretty much nothing in that bag except for coffee beans, and maybe a toiletry bag, and one change of clothing. The coffee was good and cheap.  Plus, I felt the local economy needed my dollars more than Starbucks.

The image of my favorite coffee spot in Managua was indelible, even if I’d forgotten my penchant for drinking the brew. So, after nearly 20 years, I returned to Nicaragua. Con ganas de tomar café.

Maybe those years when I deprived myself of enjoying a cafecito finally hit the wall. Or, it was the scent and sight of coffee beans everywhere. I asked for decaf but got blank stares. So, I give in to the aroma of the real deal. After all, I’m in a major coffee-producing country, be like a local. Right? Surprisingly, it doesn’t give me a jolt. Nor, does it bother my tummy. It’s delicious, and I’m temporarily hooked on the ritual of sipping and smelling the hot brew.

Now, I want to go beyond savoring the sips. I decide I need to go to the source. So, I head to two coffee plantations in different regions of the country.

Ometepe is a beautiful volcanic island with two majestic volcanoes visible from miles around. To get here, you have to take a 60-minute ferry ride from San Jorge, near the city of Rivas. From the ferry landing, you can drive another 30-45 minutes to tour a few coffee plantations.

Don Elio is my tour guide. He’s a 70-year-old spry, apparently caffeinated, man. As he chews the raw coffee beans, he tells me his mom was a cook on the plantation from the time he was three years old. The rolling coffee fields were his playground. He knows the coffee bushes, leaves, and beans like the palm of his hand. And with those crinkly sun-colored hands, he shows me the leaves. The beans. The shells.

Harvest is October 25, he tells me. By April, they will be ready to export the coffee to Canada. Finca Magdalena is part of a co-op comprised of 26 families. They tend to produce 500-600 kilos a year for Canada. This year, the production is less. He estimates it may be 150 quintales among the 500 manzanas (350 hectares).

To boost production, they recently planted citrus trees to help nourish the coffee bushes. Passing through the lime and mandarin orange trees, Don Elio scrunches up a leaf from each to release the aroma and places his hands under my nose. The farm also produces wheat, rice, and bananas, though I only see the citrus trees mixed in with the coffee on my one-hour tour.

The finca doesn’t export all that it harvests. They classify the beans as A, B, and C. C is a lighter colored bean, called sardina. B is black and called pelota or ball. A is the best. A team of 20 young girls with sharp vision and nimble fingers are responsible for quality control. On wooden ledges with three holes, they sort the A, B, and C beans.

In addition to the team working quality control, the harvesting is a team approach. Four people usually work together to pick the beans from the plants here. Then, they have to be sun-dried for a month. Walking through La Magdalena, you catch sights of the different beans drying on basketball-court-sized areas.

Other methods of quality control include keeping the bushes from getting too tall. Don Elio explains that the taller they grow, the drier the bean tends to be. So they periodically cut them down to about two feet high. Furthermore, the life of a coffee plant is measured. After 20 years, more or less, they dig them up, or cut them way down and allow new, fresher growth. Don Elio calls the tall plants borbon, and the shorter ones are caturra. Borbon can take four years to produce the good beans, and caturra is about a year shorter. Each plant produces about two kilos of beans a year

Like most farms in Nicaragua, this plantation is organic, and they seek ways to incorporate waste. For example, leaves and the shells/skin become mulch. Don Elio explains that coffee grows best at higher altitudes. La Magdalena is fairly close to one of the two volcanos on this island, where the top peak sits about a mile above sea level. Additionally, organic coffee plants need at least 75 percent shade. This part of Nicaragua is graced with blankets of beautiful ceiba trees that have sprawling roots and lush canopies.

While La Magdalena welcomes people to several 60 or 90-minute tours of their plantation, many choose to stay here for a few nights. The main cedar-built plantation house is about 130 years old. Meals are served on a large shaded veranda. Depending on your style and budget, you can pick from hammocks to private cabins. Meals range from $1.50 to ten dollars.

The staff can also coordinate day tours for guests to the volcanos, petroglyphs, or waterfalls.