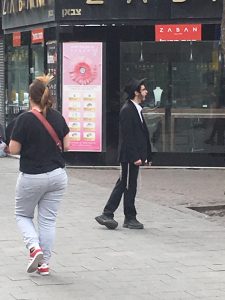 Jerusalem was headline news recently when the U.S. opened its embassy in this holy city. From HAMAS to the United Nations, it wasn’t a kumbaya moment, despite the smiles on the family members representing the White House.  In reality, Jerusalem has been the de facto capital of Israel for decades and declared a “United” city, but the brazen move triggered sensitivities*.

Having visited Jerusalem twice in the last ten years, I have only witnessed peaceful co-existence between the Arab and Jewish populations. Yes, there’s segregation. But, in my lifetime I have seen blatant segregation, racism, and discrimination throughout the United States. As I child, I saw public respect for one another, but the hidden prejudices and hatred are now very visible in the land of the free. So who are we to say we are a “United” country and Israel is not.

In the United States, we too quickly identify Blacks and Asians. Far too often, people finger out Hispanics, Middle Easterners, Indians, Pakistanis, and Jews. However, in Israel, except for the attire of orthodox Muslims and Jews, it’s hard to tell who’s who unless they are speaking Arabic or Hebrew, both of which are official languages. Moreover, the Israeli constitution states, “United Jerusalem is the capital of the State of Israel, and the proposed constitution shall reflect and reiterate this principle.”

So, imagine a place in Jerusalem where hijabs and head coverings are removed. Long black skirts, or pants, are kept in a locker while everyone wears comfortable leggings or shorts.

Welcome to the YMCA Three Arches

With its bell tower visible from a distance, the YMCA Three Arches in Jerusalem has been a landmark since it opened in 1933. An architectural jewel, it was designed by Arthur Loomis Harmon, an accomplished associate with the firm responsible for the Empire State Building.

The concept ignited ten years earlier, was for a center “…whose atmosphere is peace, where political and religious jealousies can be forgotten and international unity be fostered and developed.” The name, Three Arches, in fact, refers to the three Mohammadan religions: Christianity, Judaism, and Islam, while the 12 cypress trees flanking the entrance represent the 12 tribes of Israel.

Throughout its history, the Three Arches YMCA has aimed to unite and coalesce the different communities in Jerusalem. Its preschool was the first bilingual school in Israel. Its Jerusalem Youth Chorus encourages the kids from the three religions to become leaders for peace in their communities. The Youth Department, with free services, was nominated for a Nobel Peace Prize, apparently for far more than traditional daycare.

Finally, as a four-star hotel, guests from around the world appreciate the YMCA’s facilities. Its swimming pool is one of the largest in the country. While the sports center is the largest in the Middle East. Among the 50 weekly classes are popular ones like Zumba, pilates, spinning, and yoga. Plus, the Jerusalem YMCA offers Feldenkreis, Osteofit, Aquacise, Commando, Barre, pre-natal yoga and Gyrokinesis.

A Zumba Class is “A Microcosm of Jerusalem”

But more rewarding than building a sweat or beating your personal best, is knowing that you’re part of a playground for co-existence among Christians, Muslims, and Jews.

The YMCA’s Judeo-Christian mission works beautifully, in Jerusalem, according to Estee, a Zumba teacher here.

“There are no differences in this building. This whole place is based on that. Prejudices aren’t allowed. My goal is to look like I don’t belong to any group,” says Estee, who in fact has long bright blonde hair and pale skin.  “I cannot tell the difference between the Arabs and the Jews. Cultural differences don’t exist here. Rather, differences are seen by how high can they jump or twerk. They’re having fun and get to know everyone on a different level.”

Estee’s words aren’t empty. The Mayor of Jerusalem, commenting on Estee’s Zumba class, said it was a “microcosm of Jerusalem.”

Estee is proud of the unity among staff, members, and guests at the YMCA. She says the YMCA dissolves all differences. Especially on the basketball court, yoga mat, or dancing to hip hop beats. “It gives me so much happiness to see them interact.”

The YMCA is open seven days a week. Almost all the group exercise classes are male, or female only. YMCA members from the U.S. are eligible for a free week at the Three Arches YMCA if they bring a letter confirming their membership from their home YMCA.

Museum on the Seam

Just as Estee and the YMCA believe that physical fitness can unite, the Museum on the Seam endorses art “as a unifying language transcending borders, religions, and conflicts… a medium unlike any other in which the often opposed citizens can create meaningful conversation.”

In many countries and cities, railroads and highways create imaginary or real barriers between ethnic or racial groups. Likewise, Jerusalem has an invisible divide. East and West.

The Museum on the Seam is on that invisible border. Like the YMCA, this socio-political art space was established in 1999 to serve as a bridge.  Operating as a museum, since 2005, it is housed in a property with a long history of division between Israelis and Palestinians. Built in 1932, it served as an Israeli military outpost on the border when the city was divided. During the 1967 six-day war, the structure building was bombed and riddled with bullets.

Now, under a united Jerusalem, the museum features exhibits that encourage peace, unification, and healing between the Arabs and Jews. A new exhibit on sexual inequalities and oppression, The Women Behind, opens June 7.