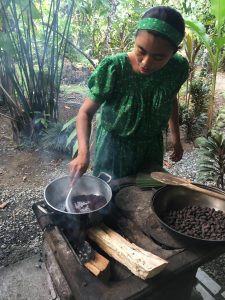 When in Central America, how can you go wrong with chocolate? I’ve been to the ChocoMuseo and Mansion de Chocolate several times in Granada, Nicaragua. Great to stay, eat, browse, or take a workshop. Both Costa Rica and Nicaragua have plenty of places to get your fix (suggestions for San Jose are listed below). But, for a more authentic, and healthier alternative, off the beaten path, visit the Museo de Cacao in Limon Province, Costa Rica.

A visit to the Museo de Cacao has a taste of authenticity for many reasons. First, it’s not in a major tourist hub. It’s on the Caribbean side of Costa Rica, about a 10-minute ride past Cahuita. It’s in the far northeastern corner of the country, 45-minutes from Panama. In this part of the country, there are no traffic jams. No skyscrapers. No big hotels. You’re surrounded by nature. In fact, the cacao museum is bordering the 2,700-acre oceanside Cahuita National Park. You can visit the museum on your own, or, plan combo tours with stops at indigenous villages, rides up the river, and more.

The Museo de Cacao is basically a small working plantation. Before you go, you may want to understand the benefits of cacao, vs. chocolate. In a nutshell, the Europeans added milk, sugar, and other not-so-healthy additives.  Europeans also highly refined and processed what was a traditional medicine for the indigenous peoples in Mexico and Central America.  There was so much respect for cacao, that, in the olden days, cacao beans were used as currency.

From Flower to Flour

During my visit, there were no other tourists, so I had a private tour.  Albeit the shortest of their offerings.

The Museo de Cacao pays homage to Manuel Leon. He wasn’t Afro-Caribbean. Rather, he was a Chinese man. In the 1940s, he was the first to export cacao from Costa Rica. The museum reflects his commissary and the style homes in which people lived on the plantation.

My guide walked me around the small plantation. He noted that there are three varieties of cacao in Costa Rica. El criollo is a longer bitter fruit that is the predominant crop here. While cacao thrives in hot, humid climates, like this, it is not necessarily a quick cash crop.

It takes five and a half years for the cacao plant to grow to maturity. My guide pointed to the delicate flowers pollinated by white mosquitos (above).  Each cacao tree may have 100,000 tiny flower buds each year, he noted. However, only 8,000 of those flowers will become fruit; and it takes three months for the fruits to grow. My guide broke off pods of the cacao fruit, cracked open the beans, and let me taste the cacao in its many stages. He explained that after harvest, the beans ferment for six days. Then, they need to be dried.  Traditionally, sun-dried, which takes two weeks. However, with modern technology, drying is sped up to just three hours.

At the end of my tour, my guide ground up the dried, fermented beans. He put them through a hand grinding mill. Then, passed the grains on to his associate. She lightly toasted the powder, then added just a touch of water to pat a thick tortilla or “huarache” shaped cacao patty for me. While powdered milk and sugar are optional add-ins, I preferred the indigenous style. No white powders. Rather, cinnamon. Ginger. Turmeric. Nutmeg. Pepper.

My cacao patty was the size of my palm. I nibbled a bit and saved the rest for the next day.  For those that gobble it all up, before you leave, you can purchase cacao bars, nibs, or powder from the museum’s cafe/bar.

Of course, you can buy cacao pretty much anywhere in Costa Rica. But the highlight of the tour at the Museo de Cacao, aside from watching my flattened form of bliss balls being made from scratch, was learning a bit about the history of cacao in Costa Rica.

The Bittersweet History of Cacao in Costa Rica

The history of cacao in Costa Rica isn’t all that sweet.

First, Africans were used as slave labor.  Even if they were free men, they were indentured servants.

Second, the infamous United Fruit Company routinely stripped the country of its natural resources, without regard for its employees. Or, politics.  By the 1930s, United Fruit was the largest employer in Central America. In Costa Rica, banana plantation owners, converted some of the lands for cacao when they recognized its commercial value.

Thirdly, Costa Rica, at one point in its history had a racial divide. Literally. President Ricardo Jimenez, in 1934, enacted Article 3, Law 31 which prohibited Black United Fruit Company workers to move to the Pacific coastal operations. Furthermore, an imaginary border wall keeping the Blacks by the Caribbean was in Turrialba, 60 kilometers east of San Jose. My guide says that this  “continental divide” kept the Blacks from the white Central and Pacific lands of Costa Rica.  Today, much of the Caribbean coast of Costa Rica retains a heavy Afro-Caribbean flavor.  Part of its beauty, in my eyes. Many can trace their Afro-Caribbean ancestry to Jamaica, Panama, or Nicaragua.

Finally, Costa Rica is not a major world cacao producer anymore. A plague hit the area in the ’70s making a major mark on the industry. In the meantime, countries farther south, including Ecuador and Brazil, and across the ocean, in Africa, began producing and exporting, cacao.

Regardless, Costa Ricans are proud of their cacao, and visitors can’t go wrong sampling cacao or learning more about the industry.

For those not headed past San Jose, La Casa Del Cacao is a coffee house that leads workshops downtown. Book your workshop in advance, and enjoy lunch or dinner before or after your workshop. Of course, there’s also plenty of items to buy, take back to your hotel, or home.

Additionally, about a 15-minute drive from downtown San Jose, Sibu has a small upscale retail shop in Escazu. It is filled with intricate more European-style chocolate treats, as well as organic high cacao content products.  Sibú leads tours of their facilities in Heredia which makes for a nice half-day trip from San Jose.