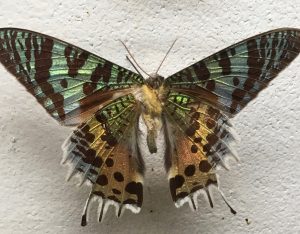 I’m a city girl. I’m used to large crowds, skyscrapers, and hustle and bustle. Yet, when I travel, I try to seek pristine locales. Soak up nature. Listen to the sounds of nature. Even when I go to cities like Los Angeles or Orlando, I am attracted to the botanical gardens that distance me from the hubbub, even if I’m just a short walk or drive away. The same goes for San Jose, Costa Rica.

The capital city has gotten larger and noisier since my first visit many years ago. About five million people now call San Jose home. It’s doubled since the early 1980s. Of course, that has its benefits. The city has a wealth of places for tourists to stay, and plenty of museums and places to stroll or shop.

But perhaps my favorite spot is a hidden gem amid the skyscrapers, materialism, and modernity. I’ve found my getaway where I can be surrounded by quiet, and walk into the habitat of beautiful winged insects.

A great number of tourists that head to Costa Rica do so because they are nature lovers. But, few recognize that you can get a great taste of nature without leaving the city. It shouldn’t be surprising that Costa Rica has butterfly gardens. In fact, there are quite a few scattered across the country. However, what is unusual is that this one is tucked away in the middle of the city: The Spirogyra Butterfly Garden.

Once inside, you totally forget that you are in the capital that is teeming with loud buses and cars everywhere. The Spirogyra Butterfly Garden feels off the beaten path, yet in reality, it is so close to the beaten path. In fact, you can walk to/from the garden to downtown San Jose, or to the neighborhoods of Amón or Escalante that are trendy and filled with plenty of bistros.

There’s a small office within Café Colibrí, where you can pick up information, or even a hot drink or snack before you enter the quiet world of the winged beauties.

In a world where most museums close on Mondays, the butterfly museum, which is private property, is open every day. The gardens are the backyard of a butterfly collector. But, we’re not talking rinky-dink, or like your next-door neighbor who has a few bird feeders. This is a full-fledged mariposario enclosed in netting.

What’s more, the place is fairly well cataloged, thanks to the volunteers who work here. While the country is home to 2000 species of diurnal butterflies and 12,000 nocturnal species, (moths) the Spirogyra Butterfly Gardens showcases about two dozen of the daytime species. You can glimpse them in a variety of forms, from pupae to caterpillars to full-fledged winged specimens.

The gardens’ signs inform the visitor that butterflies actually have hundreds of thousands of scales on their wings which create colorful effects.  Furthermore, these six-legged insects use color as a defense mechanism.  At the same time, iridescent colors attract their mates. For example, the morpho helenor reflects bright blue on one side of the wings as a mating call, while its interior colors are brown tones that serve as camouflage.

As if the butterflies aren’t reason enough to drop in, the icing on the cake, for some, is beyond the tenting. The property has an extended backyard on completely undeveloped land. After viewing the butterflies, you can take a hike or meditate while watching the flowing Torres river and appreciating nature, 360 degrees around you.

Visit with the intention of just chilling out, and finding refuge from the big city sites and sounds.