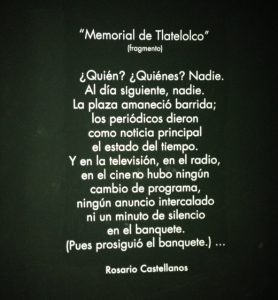 I lived in Mexico City decades ago. The downtown area, like many in the U.S., was not the most popular place to go, especially at night. In the last 10 to 15 years, during visits to el DF, I’ve seen a revitalization downtown. It’s safer to visit, and more of a destination for locals and tourists.

The Palacio de Bellas Artes has always been one of Mexico City’s gems. Last month, my opinion of the Alameda area was revitalized when I saw the signs for one of the newest museums. Located just across from Bellas Artes, the Memoria y Tolerancia (MYT) museum has been named one of the best museums in Mexico City by Trip Advisor, for the last three years. When you’re up against world greats like the Museum of Anthropology, or the casas/museos of Diego and Frida, that’s a nice feat.

The Memory and Tolerance Museum opened in Plaza Juarez less than five years ago. The Plaza is comprised of modern high rises set back from the street. Graced with a central patio and water garden spotted with 1,000 small pyramids, you can’t even hear the chugging of city buses, or car horns, from this downtown modern masterpiece. The area was designed by Ricardo Legorreta, my favorite Mexican architect. The Conjunto Juarez (complex) was financed in part by Carlos Slim, one of the wealthiest men in the world, in an effort to bring more people to downtown Mexico City, where he grew up.

In 2009, I spent several days at Plaza Juarez.  On the anniversary of the September 11 tragedy, I was one of 1,300 people from more than 50 countries gathered in the Secretaria de Relaciones Exteriores burnt sienna Tlateloco Tower as part of a United Nations conference on disarmament. Mexico City was selected because of the Tlatelolco treaty banning nuclear weapons in Latin America.  The Mayor of Hiroshima was present and gave a passionate cry for peace. “The message of Hiroshima is no one else should ever suffer,” he said. (Read more)

Unfortunately, history does repeat itself. There is still hatred and intolerance in this world and a need for The Memory and Tolerance Museum.

“If we don’t use education as a tool for social change, we will never learn to think critically about intolerance. Visiting the Holocaust museum in Washington D.C. and seeing all of the shoes of children who lost their lives created an emotional response in me that solidified the deep societal trauma taught in school books,” said Jacquelyn McAndrew a Pre-Med student in Burlington, Vermont. “History shows us appalling tragedies of intolerance. Revisiting our societal memories and re-examining the relationship between society and the individual is a proactive way to combat intolerance. The other trick is forgiveness because retaliation and aggression only feed the fire. Cultivating love and compassion for other human beings is the only way to put out the fire of intolerance,” expressed McAndrew who has witnessed prejudice as a woman of color.

One of the objectives of MYT is to make an impact on the visitor that will lead to introspection and a change in attitude, ultimately, germinating tolerance and respect.

MYT won many international awards for sustainable architecture and interior design.  As the name describes, there is a museum of Tolerance and one for Memory which is similar to a holocaust memorial. Third, to provide a kid-friendly positive experience, there is an interactive children’s play area with images from Sesame Street. Plus, there is a center for traveling shows with free admission. Until January of 2016, the temporary space explores the October 2, 1968, Tlatelolco massacre. This is a very sore spot for many in Mexico. While Mexico City was center stage for the Olympics, college students were victims of police brutality, and then cover-ups, so that the tally of lost lives was never clear.

The largest space is dedicated to the Memory of atrocious acts of genocide. The memory of the six million who died in the holocaust, and so many more, throughout time.  The words NEVER AGAIN are posted prominently, as one travels through the timeline and causes of the genocides that occurred in Armenia, Rwanda, Yugoslavia, Guatemala, Cambodia, and Darfur. Visitors can watch videotaped interviews of holocaust survivors, most in Spanish with English subtitles, listen to audio tours, or follow a docent for more explanations.

The tolerance side approaches prejudices, dialogue, discrimination, human rights, life in Mexico, and how each person can make a difference.

Magda Olguin is a TV news anchor from the state of Hidalgo, Mexico. She was deeply moved during her recent visit to Memory and Tolerance. “There were moments in which I really wanted to cry from the feeling of helplessness, seeing how human beings have destroyed each other throughout history. We should all visit (MYT) to have a clearer vision of the conflicts that burden us today.”

While the feeling inside the structure is heavy, there are a few outdoor balconies and breathing spaces on the upper levels. On the main level, to one side of the building are busts of many great leaders that fought peacefully against racism, such as Mahatma Gandhi.  The patio gives one a sense of fresh air and positive tomorrows.

Benjy Wertheimer is a Portland-based musician that just produced a short music video in response to the closed-door reaction to the recent wave of Syrian refugees. Like McAndrew, he believes art and culture can make a difference.

“My heart has been broken by the violence, polarization, and xenophobia that have been escalating in recent weeks. I’ve felt deepening anger, despair, sadness, and frustration as these messages of hate and division increase in their frequency and intensity. I must respond,” said Wertheimer, whose father narrowly escaped Nazi Germany in 1933. “We are SO incredibly privileged in our culture, and offering as much as we can to those in need to celebrate our abundance is, to my mind, essential.”

The museum is open Tuesdays through Sundays.  Allow one to two hours for your visit. Take the metro to Bellas Artes, buses along Reforma, or request an Uber driver.