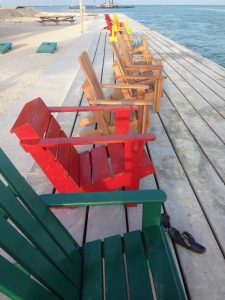 The American standard is a 40-hour week, which in reality, is rarely just 40 hours. We work hard, then maybe play hard for two weeks a year. We go to our dream islands or chill spots to let loose, and return to the same old grind. Why not turn that equation around? Spend most of your time living in paradise, and return to the mainland a few weeks a year?

It may sound impossible, or unrealistic, but many have made the leap, and are happy they did. Following are snapshots of people living, or considering relocating to St. Maarten, Spain, South Africa, Belize, and Ecuador.

Sherrie is a Mensa member, so I’d like to think she makes wise decisions. She was living on a ranch in South Texas. Exploring options as an ex-pat required caring for her equine family.

A naturopathic doctor, Sherrie made a visit to Ecuador, but ultimately chose Belize. It was relatively easy to get to, close to nature, affordable, English-speaking country, on Central Standard Time, and the country welcomed her horses.

She notes that the Gallup-Healthways Country Well-Being report listed Panama as the number one spot this year, with Costa Rica second, followed by Puerto Rico and Belize fifth in the world ranking. On this hemisphere, Mexico was in ninth place. The pollsters said Latin America is thriving because of the society which can result in less stress and a willingness to help others.

Despite arriving in a foreign land with no social connections, Sherrie made friends quickly. She encourages those on the ex-pat route to use social media like Facebook groups to begin to get to know people in your new land.

“What impressed me the most about the country was the fact that the people, who have very little in the way of material goods, seem so utterly happy and willing to be helpful,” Sherrie says. “The children still play outside with each other, rather than on computers. Food grows easily, so healthy options are readily available. And there seems to be an attitude of self-responsibility… no one expects anyone else to ‘take care’ of them. Many people are familiar with the herbal remedies in the jungle or know ‘the healer’ in the village.

Toni, like Sherrie, was interested in finding a healthier lifestyle. Co-producer of the documentary Bought, she recently completed an exploratory visit to Spain. Toni is focusing on a future in Barcelona for many reasons.

“It is along a body of water, it is bike-user friendly and I don’t have to worry about eating GMOs.” She also acknowledges that the cost of living is less than stateside.

Donna also recognized that living abroad could be more comfortable than staying stateside. On a fixed income, both Donna’s son and husband passed away within two months of each other in 2010.

“I found myself in a position of self-discovery,” she says about the time she spent grieving her loved ones. “One of my discoveries is that I am very curious about how other people live.”

“As I started researching, one place kept coming up. Ecuador. What attracted me to Ecuador, was how inviting they seem to make it for seniors. Ecuador has three different regions (the Andes, the jungle, and the coast) to choose from, and it’s on the same side of the world as Texas,” she adds.

Although she has another son, and grandkids, they’re only 45 minutes from the Houston airport, which has direct flights to Ecuador.

Carla made the long jump from Cincinnati to South Africa for a dream job. She’s working in Johannesburg with Bono’s ONE Campaign, an advocacy organization of nearly seven million people taking action to end extreme poverty and preventable disease.

After being a solo entrepreneur for many years, she decided it was “time to have the comfort and protection of a larger entity around me.”

With a comprehensive involvement in Sister Cities that exposed her to many municipalities, NGOs, and communities across the globe, Carla was ready to share her talents beyond our borders. She began a very aggressive job search trying to re-engage in the world of global development.

“The ONE Campaign was in need of a senior level temporary position in their Johannesburg office. It just so happens that the work is providing hands-on strategic advice and management of global campaigns across the continent in advance of this years’ major international events like the World Economic Forum, African Union Summit, Finance for Development Conference, and the UN General Assembly meetings where world leaders will meet to adopt a new set of global sustainable development goals.”

She got the job and took the leap. She had just one month to pack, sublet her condo, and find a place to live across the globe that she’d never visited before.

“What I discovered was just how impossible it was to try to work with real estate agents in Johannesburg in advance of your visit. Nothing was arranged until I was on the ground. The public transportation system is less than optimal, and that far limited my housing options because I needed to be near my office. Even with that being the case, I ended up in a short-term auto lease to get around. This was one of the best decisions I made. I was Uber dependent when I arrived, and that can become a burden – financially but also in terms of my ability to just go exploring the area.”

Carla has retained some of her previous clients, conducting all needed work from Johannesburg. “I must be doing something right because this week one of my clients asked about renewing our contract for 2016!”

Just as Americans may struggle to understand the culture of other countries, there are many stereotypes of Americans, abroad. In Latin America, for decades, graffiti called out “Yanquis Go Home.” Of course, your average ex-pat is not your average “ugly American.” However, what people understand about Americans often arises from the Hollywood or New York-based media and entertainment industries.

Carla acknowledges that often the South Africans with whom she interacts have assumptions that she is the typical westerner.

“More than a few times I was told that I would not understand some injustice or something because I am not African. I’ve often had to correct or educate people about their ideas and assumptions of America: ‘No, not everyone lives in a big house with a yard,’ ‘Food portions are not universally super-sized,’ or my favorite, ‘No, I don’t have any baby daddies back home, I own a small business.’”

“About two years ago I looked at where I have been geographically and realized I was going to deliberately choose a new place. I wanted to live aligned with where I am in my life peacefully,” she says. “I decided that the one thing my body likes best is warmth. So I packed up to my favorite island –Barbados. I spent 20 days looking for a place to create my retreat and eventually my Agape Holistic Resort.”

She passed on Barbados in favor of St. Maarten where she enjoys blissful morning swims in the ocean where the Caribbean meets the Atlantic. As part of her retreat center, she leads people to find their own bliss.

“We climb to a most serene small mountain and find our deserving-ness and worthiness. Does it get any better than this?”

As a Canadian on the island, there are some drawbacks, but Bernadette thinks they’re minor. “I am not a resident. I can live on this island for six months a year then must leave. That might mean a boat trip across to Anguilla which is a 20-minute trip to take another boat to a blue lagoon-type uninhabited island called Sandy Island. More bliss. Then head home after snorkeling, and I have fulfilled my regulations.”

Those rules are also the norm in Costa Rica and Mexico as well as other countries, where rather than being a burden, many tend to make the requirements part of a short excursion. Bernadette suggests finding what’s right for you. “Feel where you are led. Make your dreams come true!”

Despite any drawbacks to living or working abroad, Carla says it’s worth the challenges. “Quite simply, if you get the opportunity to do so, take it. Reading and researching about what it will be like is great, but the real-life living of the situation is something you’ll never get from your research. Immerse yourself in learning and experiencing first-hand about another culture. Be patient. Learning a new way of doing things or how things work differently can sometimes be frustrating. Step back and take advantage of the opportunity to learn something new.”

Bernadette says, simply, “put your brain on hold and watch your life unfold.”