Beyond Rice and Beans in Monterrey, Mexico 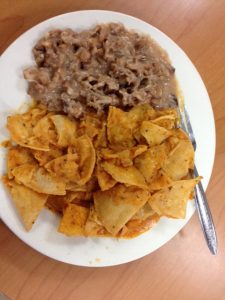 For more than 40 years, I’ve been going back and forth between the U.S. and Mexico. An experience during my first trip to the land of Tenochtitlan was the turning point that would make me a vegetarian. One of my favorite dishes from that first experience in Mexico was eating scrambled eggs with nopales (cactus). The nopales were given to my host, as payment for medical services.

The foods of Mexico are rich in flavors, nutrients, and colors. After all, this is the land of chocolate and salsa, two things some people can’t live without.

I find it’s usually easy to skip meat in Mexico, especially when choosing freshly made to order items from street vendors. Sopes were always my favorite, and I order them, vegan style, from Baja to Chicago.

Monterrey may be known for cabrito (baby goat) and arrachera steak. But more and more Regiomontanos (Monterrey residents) are skipping the beef, for just a meal, or for good. That may be one reason why there are about 15 vegetarian and vegan restaurants in this industrial city of four million.

While there are a few choices near the Tec (University), such as La Oveja Verde, and one in the suburbs, Vegan Inc., most are centered within walking distance from the MacroPlaza. Many are a bit hard to find, lacking signs, window displays or have moved recently. Others listed online, have closed, so best to call before you go and verify the address and hours.

Smack dab in the middle of the historic district, on Galeana 1018 just south of Hidalgo, is NutriSano. This is one of the few places that serves coffee with soy, I’m told. It’s open 9-5,  primarily serving egg dishes for the early crowd. However, you can special request eggless chilaquiles. At lunchtime, they have a full buffet. NutriSano prepares fajitas, picadillo or milanesa using soy or gluten. Kids can choose from vegetarian nuggets, pizza, or burgers. Most NutriSano’s clientele are locals, but they have tourists from Chile to China, many of whom are vegan.

The Barrio Antiguo is one of my favorite areas in Monterrey, just east of the MacroPlaza. Abasolo Street is veggie heaven. Trece Lunas is a very hippy style, large coffee house, and restaurant. It’s actually called an espacio multicultural, and it’s a very comfy place, especially if you have ADHD. They boast a vegan special and are planning a wider variety of vegan offerings. Their slogan is “Welcome to the home without time. Please enjoy the moment.”

Across the street, there is a doorway with a barbershop on the left, and a cafe on the right. The unmarked Los Falafel at Abasolo 853 has enclosed and open-air sitting areas on the right. The menu is very limited, but it’s all vegan. Falafel in pita. Falafel in a flour tortilla. Falafel burger. Falafel with hummus. All, modestly priced, open from 1-10 p.m.

Hare Krishna, is one of the many restaurants, around the world, run by the International Society for Krishna Consciousness. Just a few blocks west of the MARCO museum, on Abasolo #916, it’s open for lunch and dinner, Tuesdays through Sundays, and has indoor and outdoor eating areas. Hare Krishna is 100 percent vegetarian and egg-free. Some of the dishes are made with butter or milk, but there’s a good enough selection for even the pickiest of eaters. They don’t have a lot of soy or gluten-based dishes, which is a plus for those that follow soy or gluten-free diets. I’m not a fan of green beans, but I ate every one that was prepared with a rich peanut sauce. Included in the price of the meal are a drink and dessert.

Around the corner, on Diego de Montemayor 1120, is a vegetarian cafe called Teshanta. It’s a comfortable tea and coffee house with several Mediterranean and Mexican favorites made with soy or other meat-free ingredients. The tabouli, made with red cabbage, was better than most I’ve had, and the falafel balls were served with an avocado dressing. Teshanta is open Tuesday through Sunday until 10 or 11 p.m. and also has an outdoor patio.

On that same block is Spiral Radiante. Anga is a graphic designer who relishes the foods, cultures, and spirituality of her native Mexico, and India. She’s been a vegan for more than a decade and is intent on eating pure, organic kosher-grade foods. She’s also a great cook, so opened Monterrey’s only vegan sattvic restaurant, serving daily specials or menu items Tuesday through Sunday from 10 to 9 p.m.

She used to serve her vegan meals near the Tec university. It was very popular among the kids who were looking for inexpensive, hearty tasty meals.

Now, in the Barrio Antiguo, she’s using her tiny space to have events, and also sells products such as herbal analgesic pomades, spiritual books, artisan pasta, and Indian textiles. Of course, her food is the core business. Her kitchen is a fusion of India and “Meshico.” For a very low price, she’ll serve you a good-sized salad peppered with kale, carrots, and more, a soup, main meal, drink, and dessert. You can’t beat that, even if you’re not on a student’s budget or a meat-eater.

Just north of the Barrio Antiguo is the Santa Lucia river walk. Immediately behind the MUNE museum complex, on Jose Ignacio Ramon 820, Govinda serves a buffet from noon to 5 p.m. Tuesday through Sunday. Eat as much as you like for only 79 pesos, or 120 for two on Wednesday. The offerings switch frequently, but there are always salads, a dal-like soup, rice, pasta, and samosas. Much of the food has Indian-inspired flavors and ingredients. My favorite was what looked like falafel patties, but they were made out of cabbage. Since this is Mexico, there are some inklings that were in the land of Cortes like jicama and jamaica water.

A bit farther north of the Santa Lucia area, near Washington on Rafael Platon Sanchez 226, is an incognito vegan heaven. Noveno Elefante is a comfortable place with three tiny sitting rooms, and bench-like tables and chairs. Alberto Cepeda opened the restaurant after nine years of dreaming about it. He didn’t want a commercial feel, but a homey look, which is one reason why there’s no sign in the door or on the front of the building.

He chose the elephant to represent his business because “It’s the largest animal on earth, is very peaceful, and has a lot of contact with the herd.” When they die, he explains, they gather together for a ritualistic goodbye.

Alberto was also intent on creating an homage to his beloved traditional cuisine, without using any animal products. He’s pet-friendly and allows guests to bring their pups with them. “The best way to respect them (animals) is by not eating them,” he says. He acknowledges that most of his customers eat meat, but feels that any reduction in slaughter is helpful. Once they try his dishes, they come back, refer others, and realize there are alternatives to good healthy, and filling meals. Many prefer his tacos and hamburgers. Flautas are the next biggest seller. I had the best vegan enmoladas, ever. Noveno Elefante is a family affair. Alberto’s sister is a server, and mom and dad are in the kitchen, working to serve guests from noon to 10 p.m. Plus, his mother opened a vegan bakery, Atanor, nearby.

Head north a few more blocks, and back west to Zaragoza for Trigo Limpio (339 N. Zaragoza). From the outside, this looks like any other large, clean, bakery. But it’s all vegetarian and they sell an assortment of health food products, too. Upstairs, is a large cafeteria. Fill a plate for 89 pesos, or pay 118 for all you can eat. There’s a salad bar, dessert, and plenty of Mexican-style entrees, many of which are made with seitan or soy. Trigo Limpio has several styles of tamales, and hot foods, however, much of what they serve is vegetarian versus vegan, and gluten-free folks will need to be careful. Nonetheless, it’s a large, clean place, with loads of offerings.

Finally, if you can’t find what you’re looking for, maybe the vendor will find you. Pachamama is one of many food trucks that are starting to park at different locations throughout Monterrey. Pachamama is all vegan, offering ceviche tostadas made with mango and corn, smoked portabella burgers, taquitos or gyros.