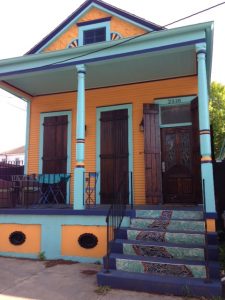 New Orleans is such a vibrant, heritage- and history-rich and colorful city. It has a beat of its own, that isn’t restricted to the nightclubs or restaurants in the French Quarter. It’s a new world, or rather old-world rejuvenated.

Fauborg Marigny is oozing with history, as are most parts of New Orleans.  Fauborg means false (fau) town (borg). It was named this, because it was considered a suburb, out of the city limits. Way back when, of course. The second half of the name, Marigny, is the moniker of a wealthy family that owned a large plantation here.

The Marignys were French nobility ad one of the wealthiest families in the Louisiana colony. At age 15, Bernard inherited everything when his father died. His uncle sent him to Europe, evidently without a monitored allowance. As a result, young Bernard squeezed the pocketbook nearly dry. A gambler, he introduced craps to Louisiana.  The Marigny district was founded in 1805 when hungry for money, Bernard sold off most of his land.

The architecture throughout New Orleans is one of its treasures. Fauborg Marigny may be one of the best places to check out Creole design and planning. With an elevation of one foot, and with many structures built above the ground level, most structures survived the water damage from Hurricane Katrina.  From the single shotgun house to the double gallery home, the architecture here is far different from other parts of the country. Narrow frontages were popular because taxation was based on the width of their property, and the number of rooms. Hence homes used armoires, as even closets were counted as rooms.

Treme is the heart of the original African-American community. Just north of the French Quarter, starting at Rampart Street, it’s a cute neighborhood, devoid of all the commercialism and crowds of its neighbor. The 32-acre Louis Armstrong Park was built in the ‘70s. It covers what once was Congo Square, an area where African slaves would frequent on their days off. Plenty of dancing and drumming took place at Congo Square so that this area is considered the birthplace of jazz. Today, it’s home to the Mahalia Jackson Theater, a municipal auditorium, and plenty of sculptures and green space. If you happen to be in town for the Easter Gay Parade, the festivities start at Armstrong Park arches. In the spring and fall, Jazz in the Park takes place here.

Spanish traditions carried over to the above-ground burials in New Orleans. The St. Louis Cemetery was the second formal burial site in NOLA. Among the 1,000 tombs here is that of Marie Laveau which has been featured on national network TV. Considered a voodoo queen, she was a humanitarian at heart. This hairdresser went to mass daily. She cared for the sick and buried 87 people who couldn’t afford proper burials.

Heading downtown from Treme is Iberville. Now the site of a housing project, there’s a colorful bit of the history behind the projects.

At one point, there were 500 gambling places all over the city. Sydney Story, a politician, went to Europe. Influenced by the legalized gambling and brothels there, he thought it would benefit his city to confine the vices to one area. Along with all the checks in place to control them, Storyville was the red light district. It was limited to 16 square blocks from North Basin to North Robertson, bounded by St. Louis Street. The area was also a feeding ground for musicians like a 15-year-old Louis Armstrong.  Jelly Roll Morton apparently did plenty of gigs in Storyville, too. http://www.storyvilledistrictnola.com.

Mid-City was once considered the “back of town.” Now, it’s more like a “city center.” City Park is in this district, and you can spend all day and night here. In fact, there’s a 24-hour cafe located in the park, and plenty of family-friendly free activities to keep you busy for an entire weekend. There are train rides, an amusement park, kayak rentals, and a mini-golf park. Art lovers will relish City Park’s Besthoff Sculpture Garden. A beautifully designed park, in and of itself, there are 60 sculptures by different artists, all donated by Sidney Besthoff.  Another site for sculptures at City Park is the Botanical Gardens. Enrique Alferez arrived in NOLA in 1929. Originally from Mexico, he worked on an installation for the 1933 Chicago World’s Fair.  There are more than a dozen of his masterpieces at the Botanical Gardens, along with historical briefs.

Until May 1, there’s a spectacular illuminated exhibit at the Botanical Gardens.  Go after dark, to best appreciate China Lights. Stroll among enormous Chinese pagodas, dragons, and flowers, and catch a show of Chinese acrobats and plate spinners.

Think beyond Bourbon. Get out of the French Quarter Box and experience the gaiety and history and traditions that New Orleans has to offer…off the primary tourist path.