Bethlehem: Banksy and other Artists 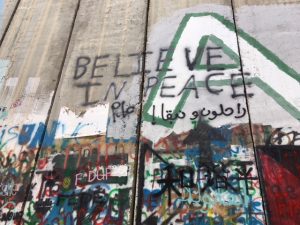 Bethlehem. It’s just a few miles from Jerusalem. Yet, it’s separated by a wall, and Israelis can’t enter. Nor, can many Palestinians easily cross into Jerusalem.

Most tourists here are on Christian pilgrimages. After all, Bethlehem is where Jesus was born in the manger. The second subset of travelers is those interested in learning what’s going on between Israel and the Palestinian-occupied land next door.

Beyond politics or religion, there’s another reason to visit Bethlehem. Art.

Regardless of political leanings, the Banksy Wall is a big draw. Banksy is a household name in the U.K.  Over the last ten years, this anonymous street artist made a big mark in Bethlehem. As a result, hundreds more have added their artistic expression to the dividing wall, aka the Banksy Wall.

The division between Israel and the West Bank extends 810 kilometers. Its construction cost $1.3 billion. The Banksy portion of the dividing wall is built out of heavy concrete blocks, lowered into place by cranes.

However, other parts of the wall are trenches, security checkpoints, wire fences, or electronic surveillance areas.  While planned protests have been occurring along the Gaza border since 2005, Bethlehem is not one of those primary stages. Resistance here is with words and color. Some messages are positive.

“From Palestine with Love.”

“No Peace Without Love.”

To see the wall from different perspectives, many head around the corner to the new 10-room Walled Off Hotel. In 2017, it was named Art Hotel of the Year. The kitschy hotel promotes their place as rooms without a view. Yet, if you like graffiti art, the views are outstanding. Aside from what’s beyond the curtains, the hotel has great character, reminiscent of Sherlock Holmes or Inspector Clouseau times. As part of the theatrical elements, this hotel has passages hidden by faux library stacks.

Within the Walled Off Hotel are many of Banksy’s works of art. Plus, there is a gallery and museum.

The Walled Off Hotel Gallery is on the second floor. A recent exhibit, “Alienation,” was a collection of period photographs. Artist and actress Raida Adon used still and video cameras to portray herself and others as aliens. Wardrobing was provincial traditional European. Men in suits. Women with lace shawls, doily-like lace sleeves and collars, and antiquated blocky footwear. The immaculately coifed and costumed characters are plopped into settings that don’t fit their attire. Forests. Railroad crossings. Empty rooms. The commonality is the emptiness in their faces. The vintage characters appear lost. Or, airbrushed into place.

The visitor’s guide explains that the “idea behind the exhibition is to connect the viewer to the personal memory of the artist who keeps moving from one life to another, and from one place to another without finding safety…”

Adon, an artist from Acre (in the north of Israel) recreated scenes to depict her memories of displaced people. “People inside lifeless, empty houses looking for a glimmer of light.”

As Adon expresses a diaphanous treatment of community or homes, “House…Houses” is another exhibit that focuses on whatever “House” may mean to the artist. This exhibit includes works from Palestinian artists living in Israel, Gaza, Bethlehem, Ramallah, Hebron, and Chicago.

The aim of this exhibit is “to challenge reality and transcend the narrow frame of time and place.” The artists draw from both reality, faded memories, tales, and symbolism to relay their meaning of houses. Literal or figurative.

The Walled Off Hotel Museum welcome signs warn visitors, “This exhibition looks at the wall from many angles, and so contains material some people may find upsetting.” While the hotel is decidedly English, the welcome sign says the conflict “began exactly 100 years ago with an Englishman and the stroke of a pen. Not only did the British help create this mess —now they’re back telling its story.”

There’s also a gift shop with books, postcards and knick-knacks. A larger independent gift shop, The Banksy Shop, is directly across from the wall. The owner, an elderly Palestinian, serves visitors delicious samples of his coffee infused with cardamom.

Finally, for hands-on art, visit the hotel’s Wall-Mart. Here, you can grab all you need to create your own mural wall art.  Spray paint. Grab a ladder to make your mark in high places.