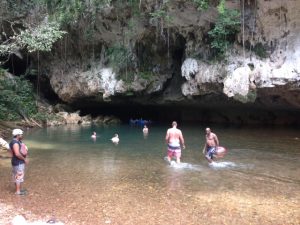 Belize is a very small country tucked away between Mexico, Guatemala and Honduras. While there are traces of the Mayan history and culture everywhere, it’s a decidedly Caribbean country. Formerly known as British Honduras, Belize has only 370,000 inhabitants. Consider that the country of Jamaica is a much smaller landmass, yet has nearly three million residents.

While Belize has a small geographic area and even smaller relative population, it boasts the second-largest barrier reef in the world.  Australia’s Great Barrier Reef is tops, yet some Belizean visitors say this one is just as good for snorkeling or diving.

Sue Wells, United Nations Development Program Global Environment Facility’s Coastal Zone Management Project wrote in a case study, “In Belize, the coastal waters were used extensively for fishing by the Mayans between 300 B.C. and 900 A.D.  However, the main use of the Belize Barrier Reef is now tourism.  So Charles Darwin referred to the Belize Barrier Reef in 1842, in his study of the origin and evolution of coral reefs. Since then it has become renowned as the largest barrier reef in the Western Hemisphere. Nearly 260 kilometers long, it runs from the northern border of the country, where it is only about 1 kilometer offshore, south to the Sapodilla Cayes which lie some 40 kilometers offshore.”

There are two primary launch pads for reef visitors. San Pedro, in Ambergris Caye, and Caye Caulker. Both are accessible via water taxi from Belize City. San Pedro is a bit larger and more populated, whereas Caye Caulker has more of a laid-back backpacker appeal. Caye Caulker is the first stop from Belize City on the water taxi (a 45-minute breezy ride) and San Pedro is another 30 minutes beyond that. At the same time, there are airstrips in both towns, with service via Maya or Tropic Air. (Note: The Caye Caulker airstrip is temporarily closed for repairs.)

Tour operators from both islands offer full-day snorkeling trips to Hol Chan Marine Reserve and other interesting spots like a sunken ship covered in coral and marine life. Most visited snorkeling sites are between the popular tourist destinations of Caye Caulker (population 1,500) and Ambergris Caye (population 14,000). The islands are east of Belize City, and accessible via water taxis or small puddle jumpers. One of the popular places for diving is the Blue Hole, considered a Top Ten Dive Destination. This is a bit farther off the mainland, but still easily accessible from either of the cayes.

While some may say that the coral in Belize is not that colorful, it is beautiful in many ways. There may be no bright neon pinks and reds, but underwater are cool mauves, grays, sage greens, and tangerine shadowy pastels. What you see and feel in the water is soothing, while slightly invigorating.

Plus, there are a wide variety of corals forming interesting shapes with different textures. Some of the coral forms in the Belizean waters have names to describe them: lettuce, elkhorn, and brain corals.

To protect the marine life, and for the safety of the visitors, snorkelers and divers must be accompanied by
a licensed operator.

Hol Chan is the easiest place to chill out underwater. The name Hol Chan, is Mayan for little channel. Indeed, this is a channel that cuts through the reef.

The reserve was established in 1987, with support from the World Wildlife Foundation. It’s important to note that Belize became a fully independent nation just six years earlier, in 1981.

More than 160 species of fish live in this area. In addition to the diversity of sea animals, there are 40 varieties of corals.

We had a total of about seven stops on our tour which was via powerboat. Despite the fresh fruit and lunch and ginger limeade we were served, the sun zapped some of my natural energy. Nonetheless, I felt like I could have hung out, underwater, much longer at each site. Just window shopping. Fish and reef watching. Everywhere I looked, it was intriguing.

Our captains/guides from Stressless Tours in Caye Caulker were excellent at leading the way. Fortunately, they were both wearing bright red shorts, so it was easy to spot them underwater.

Freediving deep down in the water, our captain would point out different forms of sea life. When he’d bob up for air, he’d explain what we’d just seen, or were about to see. We only had a group of six, with the two guides, which made it very comfortable and easy to keep together and hear what they had to say. Both were good about ensuring that none of us was straying too far away. Plus, they had underwater clapping signals to draw our attention to anything interesting coming our way.

Know Before You Go

It should be obvious, but the full-day trips are only for those who are physically fit and comfortable in the water. While it’s ideally for good swimmers, some of the tour operators have floaties to help those that can’t swim well. One family of five, with three young boys, thoroughly enjoyed the half-day trip. Stressless, has taken families with very young children and has even helped pull them in their floating devices so that the parents could better enjoy the trip.

Another obvious: Bring sunscreen. Our boat had plenty of shady areas under which to sit, but many do not. Plus, once you’re in the water, the sun will strike right through it with fervor.

The tour companies typically provide masks, snorkels, fins, food, and drink. Stressless, as well as a few other operators, rent Go-pros for the day. Some rent prescription masks.

While there are so many tour operators from which to choose, Stressless is the only eco-friendly snorkeling tour company. “Our goal is to have a minimal impact on the fragile ecosystem in our beautiful ocean,” says owner Keith Anderson. “We like to keep our groups small in order to have a minimal impact on the environment and to remain true to our eco-friendly aspect.” It was obvious that Stressless employees loved what they do, and were proud of the Belizean marine life. Finally, it is Belizean-owned and operated.