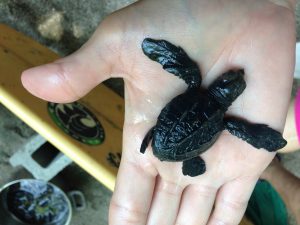 There are a few surfer magnet beaches, tucked away between Cabo and La Paz.  They are fairly small, quiet beaches, with no high rises, no major hawkers on the beach. They are jewels for the surfers — and turtles.

Todos Santos is called el Pueblo Magico and is known as a haven for ex-pat artists. The surfing beaches here are not easy to find. They’re for those in the know. Like the Olive Ridley turtles. Cerritos and Pescadero are a little bit more visible surf spots, closer to the highway than those of Todos Santos, which is about a ten-minute drive farther north. Just as surfers from across the oceans may choose these beaches to lay down their boards, mama turtles come from as far away as Japan, to nest on these shores.

Several years ago, NPR reported on the endangered species in Mexico, and what the government was doing to try to save and protect the few that were remaining.

“Prior to 1950, an estimated 10 million Olive Ridley turtles nested each year on Mexico’s southern coast. By 1988 — shortly before Mexico banned their harvest — the population had dropped to just 40,000.” Today, the Mexican government has a ban on killing these turtles, and, has programs in place to help get the numbers of turtles back in balance, a bit more.

Griselda is a volunteer responsible for the 37-kilometer stretch surrounding Cerritos, south of Todos Santos. She has accreditation and licenses from the Mexican government to harvest and release turtles in Baja California Sur.

Griselda has been spearheading these efforts for about 12 years. Her field work was happenstance. She was living on Pescadero Beach when she found eggs and decided to help protect them from all the dogs that roam the beaches. As much as Griselda has a love for the turtles, she’s not fond of unleashed dogs that can harm the eggs and the hatchlings. Griselda has a patch of beach property where she buries the nests, with markers indicating the nesting date.

She says that Baja is nesting ground for several endangered specials, of which the Olive Ridley turtles are most prominent. Last year, Between Todos Santos and the stretch that Griselda patrols, more than 5,500 hatchlings were released.

She welcomes tourists to help her collect turtle eggs, and then watch the dawn or dusk release of the baby turtles. On one recent evening, alone, she helped 500 baby turtles find their way back to the ocean.

The hatchlings are small enough to fit in the palm of a child’s hand. Yet, adult Ridleys can weigh up to 100 pounds and extend two-feet in length. According to Griselda, they have a 45-day gestation period and a 150-year life span. Maturity isn’t reached for the first ten years or so.

National Geographic confirms that some of these adult turtles travel thousands of miles, to the shores of Mexico.  “They migrate hundreds or even thousands of miles every year and come together as a group only once a year for the arribada, when females return to the beaches where they hatched and lumber onshore, sometimes in the thousands, to nest. Even more riveting is the later struggle to the ocean of each tiny, vulnerable hatchling.”

That’s why Griselda, and others, roam the beaches all hours of the night. Rather than bar hopping, she’s hitting all the beaches in the late evening and wee hours of the morning. She drives a four-wheel Moto trying to find the nests, scoop them up, and protect them until they’re ready to hatch. Once they make their way to the ocean, it’s still not safe sailing. While the Ridleys eat primarily algae, other sea animals are not as kind and make the baby turtles their prey.

The Ridley hatchlings may struggle at first to turn over and head toward the water.  Females lay about a hundred eggs starting around July. The release of the hatchlings is done just north of Rancho Pescadero, and at La Cachora beach in Todos Santos, from mid-September on.

A much smaller number of leatherbacks (laud in Spanish) nest and hatch here, given the total world population, has been decimated. Mexico, at one time, had the majority of the world’s leatherbacks. There is only about one percent of the leatherbacks compared to the number that was here in 1980.

Leatherbacks, at 2,000 pounds and 6.5 feet long, are among the largest reptiles in the world. Some, migrate 7,000 miles across the Pacific.

Aside from the Ridleys, the critically endangered leatherback, and occasionally the Black sea turtle, also choose this part of Baja for nesting.  The season for the leatherbacks is after the Ridleys, once the sand temperature drops below the necessary 26 degrees Celsius required for successful incubation.

The local non-profit Tortugueros group has a Facebook page with updates on the hatchlings and release watches.