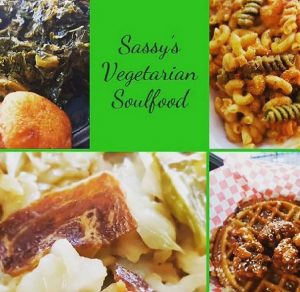 One of the many things that make Austin — well, Austin — is the street food scene. Nestled away throughout the city are food trucks, often within small trailer parks. These al fresco diners feature a great variety of options to quench your thirst or tastebuds. Despite the makeshift and tattered mobile kitchens and dining areas, the food is just as good as if it served on china and white tablecloths.

As Coronavirus ravaged businesses across the country, the food trucks in Austin weathered the storm better than many other dining establishments.  Most Austin food trucks were among the first eateries to re-open after Covid lockdown restrictions were modified. By their nature, the food parks assure diners there won’t be any stagnant air. It’s also easier for people to social distance themselves. It’s not uncommon for the trucks to have a six-foot space at the order window separating the staff from the customer. That’s the case of one, very unique dining concept.

Most vegans tend to stay away from Southern fare, as there seems to be an abundance of pork, pork fat, and other animal products in pretty much everything. Not Sassy’s.  This food truck menu tempts you, regardless of if your dietary restrictions or preferences. It’s soul food, minus the high levels of cholesterol, sodium, or saturated fat. But chock full of flavor.

Sassy’s trailer is conveniently located at 1403 E. 7th Street, east of I35, north of the river, and south of the university. Owner, Andrea Dawson stopped eating animal products for digestive health reasons. But, she didn’t want to give up her taste for soul food. She searched for vegan soul cuisine in Austin and came up empty-handed. Not to be discouraged, she chose to stir up her own creations. She found a retiring food truck, bought it, and began serving up the food was craving.

She says most of the items on her menu mimic the taste of her family dishes, but without the meat or pork products.

“I consult my mother on many of the dishes who helps me with the preparation of items. I substitute where needed. The key is in the seasonings.  I use very little straight-ahead salt, but I vary the taste with spices that may not normally be found in some dishes but compliment it very well.”

Although one guest said she wanted to eat everything on the menu, the hands-down best seller is Chicon and Waffles. Chicon (the name of a street where she first opened the trailer for business) is chicken-flavored seitan. It’s a filling dish that people order for any meal. Since the waffles are egg-less, it’s a real treat for those who love their waffles, but who nix the eggs.

Sassy’s doesn’t hold back on the standards like black-eyed peas, baked sweet potatoes, cornbread, collards, cabbage, and kale. All are smothered, or sauteed, in vegan butter. No holding back on the butteriness or creaminess, Dawson whips up a scrumptious Cajun Mac and cheese with sausage. But, the cheese is replicated from nuts, and the sausage is a plant-based alternative.

Dawson says, “The ones that warm me are when non-vegans are dragged here and are blown away.  I am just tickled.  I had one person rave about the Poke Chop Sandwich (made from ground mushroom, wheat meat, and soy) because pork chops were something they thought they’d never enjoy again but mine was very close, that felt very validating.”

Sassy’s attracts all types of diners.

“I have lots of regulars that have been here from the very beginning who have seen how the menu has evolved over time. Young people who want to eat a healthier alternative than their parents. Older adults are now being told to modify their diets. And lifelong vegans looking to vary their choices,” she adds.

For those not familiar with the food truck culture in Austin, this is a great way to sample not only soul food but East Austin. Sassy’s is open this fall Thursdays through Saturdays, 3 to 8 p.m.
with outdoor eating areas within the yard.