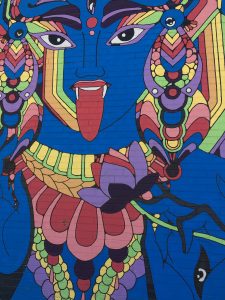 Austin. It’s the capital of Texas, with an incredibly beautiful red granite and limestone renaissance revival Capitol. The building peaks with a serene, yet powerful rotunda. The imposing Capitol is set upon a mall reminiscent of the one in D.C.  On any day, you can see different groups picketing to promote their concerns from breast cancer awareness to the women’s right to choose.

Among the demonstrators or politicians that walk up and down the broad walkways are always a handful of colorful folks that silently scream out the city’s unofficial slogan, “Keep Austin Weird.”

Austin is also the silicon capital. Not only of Texas but pretty much the entire country, beyond northern California. The once quiet Texan town is now a sprawling city with soaring market prices, thanks to the influx of techies. The Austin silicon belt is far north.  Those that want to live in the other capital of Texas, the music capital, tend to veer downtown and south of the river.

Both the tech and music scenes create inflated room rates during festivals like ACL or SXSW. Aside from the high prices of the rooms during these festivals, ticket prices can easily set you back a grand.

In 2013, a new festival came to downtown Fourth Street.  Wanderlust. More like a yoga block party, the ticket prices hover about $100 a day, and hotel prices that weekend are standard.

Wanderlust Austin is attended by about 1000 yogis, more than three-fourths of whom fly or drive into Austin for this event.

Wanderlust festivals began in 2009, but after the owners opened a permanent yoga studio in the center of downtown Austin, they brought the fanfare to Texas for four days of yoga-centered fun and learning opportunities.

“It’s really a different model for us,” explains Jeff Krasno, co-founder of Wanderlust. “We have these 4-day destination resort events and we have one-day urban park events. Austin in its own weird way is its own model. We close down a city block and it’s a yoga block party.”

There are a number of yoga festivals that take place across the country. The intended design of Wanderlust is to create community. In Sanskrit, sangha has a very important meaning. Beyond “community” it infers a healthy structure for us to grow and thrive.  Austin’s Wanderlust was patterned after the block party concept from the 60s that brought neighbors closer together.

“We’ll probably keep Austin weird,” adds Krasno.  “We try a bunch of fun things. We had a tie-dye party. That was in character (with Austin), and we wouldn’t do it anywhere else.”

Rachel flew in from Chicago. In one day, she took a Thai massage workshop, acro-yoga, and a Hoop Groove class. Not your typical yoga studio offerings.

“A bunch of people from New York came down because Austin has its own mystique. People at this event want to go out and discover Austin.”

Of course, music is also at the heart of the experience in Austin.

“We program a little differently in Austin,” says Krasno, himself a musician and record producer. Local bands perform at night in the street party atmosphere, and the organizers give attendees enough legroom or free time to be able to explore the great Austin outdoors, veggie spots, and music scene.

Meredith is a yoga teacher from San Francisco at Wanderlust Austin. “I’ve been to a bunch of Wanderlusts,” she says. “Most are in the mountains, and I’d never been to Austin,” she says about why she flew south. She was also attracted to the city that’s known for food and music. Meredith took a long walk across the river and chanced upon one of the city’s favorite vegetarian centers, Casa de Luz, where she had “delicious butternut squash soup,” among other things.

Food seems central to most festivals, and the Wanderlust Yoga Studio has its own cafe that specializes in smoothies and acaí bowls. To add more Austin flavor to the festival, a food truck was at the corner of Fourth and Brazos offering plenty of options to the attendees. Austin has food trailer parks set up all over the city offering an outstanding variety of foods. At Wanderlust, Cazamance served up peanut butter hummus on a bed of spinach, coconut curry, and a peanut butter stir fry with couscous, at reasonable prices.

“It’d be really awesome and super fitting if we had more food trucks and launch a food component of the event with picnic tables for people to eat and commune — a new and extra dimension to the event,” Krasno says about the future of Wanderlust Austin.

Wanderlust is known for its heavy connection to nature. In Austin, while the yoga classes are indoors, every day there are options for Stand Up Paddleboard, yoga runs, or cycling classes. “We do our best within the context of Austin,” says Krasno who designed Wanderlust, in part, because his better half, actress Schuyler Grant, is a yoga teacher.

“My wife opened a yoga studio upstairs from my office. I was just starting to gel with that community and the values intrinsically baked into the yoga community –political or social. I got into my own little weird yoga practice that I do every day.”

Krasno took his learnings as a successful music producer to create what he sees as best in class yoga festival.

“We put a tremendous amount of care and time into curating the program, and we produce a top-notch experience. We have superlative yoga teachers. Events serve as big community gathering points that maybe happen once or twice a year for someone. It’s hyper-reality. Learning and soaking in, in large masses of people that are like-minded.”

Dates for Wanderlust Austin 2015 are not set yet. Check out other Wanderlust festivals at http://wanderlust.com/yoga-festivals/