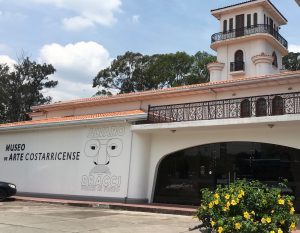 Boston has Faneuil Hall. Chicago has Millennium Park and The 606.  Monterrey, Mexico is known for the Fundidora, while San Antonio, Texas boasts both the Quarry and the Pearl. Around the world, there are great examples of taking shuttered factories, train lines other icons and converting them to great places for people to gather and enjoy.

Costa Rica has two art museums where the history of the local landmark is just as interesting as the artwork inside. MADC and  MAC. Both operate under the auspices of the Ministry of Culture and Youth.

The Museum of Contemporary Art and Design is in downtown San Jose, in the old FANAL (National Liquor Factory).  It’s situated in a great part of town for those wanting to soak up history and culture. It’s a few blocks distance from an array of museums, parks, plazas, and government buildings.

In addition to the area that can keep you busy all day, what makes the complex worth a visit, are the quality art exhibits, small gift shop, and remnants from the factory. If you let your imagination roam, just a bit, you can see, smell and hear the process of converting grains into spirits.

The factory opened in 1856, not long after Costa Rica became an independent nation. Purportedly, the objective of the factory was to address public health concerns. The government wanted to replace homemade alcohol with brews crafted under sanitary conditions subject to State-run quality controls. At the same time, FANAL would further the interests of the sugarcane industry.

“…all the existing distillation equipment in private hands was centralized in San Jose…and this was how in 1853, one of the country’s first and largest industries was founded under the name of the National Spirits Factory — later to be renamed the National Liquor Factory.*”

Now, a guard sits at the front corner of the complex where you can envision factory workers checking in and out for their duties. Behind the entrance lies a pit two and a half feet deep. This was the molasses font. A 272,000-gallon wrought iron tank from Belgium where molasses would sit and ferment.

FANAL was actively distilling and packaging spirits until 1992. Over the next two years, the facilities morphed to house the Ministry of Culture and Youth, the National Dance Company, and the Museum of Contemporary Art and Design.

Today, the museum, with 1200-square-meters of floor space, is a great repository for expression. The rum warehouse and bottling area were converted into five exhibition halls.  Works on display range from graphic, industrial and vernacular design from the late 20th to early 21st centuries. Emphasis on diversity and issues concerning identity come to the forefront. A recent exhibit, “Potassium: The Consequences of Abundance” delved into many faces of bananas, artistically and politically. A wide range of pieces, all done by the same artist, begged the visitor to extrapolate thoughts. Docents had some of their own comments but acknowledged that everyone would be touched differently. At the end of the exhibit was a dark, empty room, to allow one’s mind to tie the knots…or let the mind unravel further.

The Museo de Arte Costarricense is no Louvre or Prado. However, what makes it worthwhile is understanding that all the exhibits are within the halls of the former San Jose airport. What’s more, the sculpture garden and La Sabana park are occupying what once were runways.

The outdoor sculpture garden is inviting, but nothing like the Besthoff in New Orleans. The MAC’s outdoor addition opened in 2003. The large pieces are by Costa Rican artists Hernan Gonzalez, Jorge Jimenez Deredia, Francisco Zuniga, Jose Sancho, Juan Manuel Sanchez and Crisanto Badilla.

Nestled in what’s now smack dab inside urban San Jose, half an hour away from the current airport in Alajuela, La Sabana only saw inbound and outgoing flights from 1940 to 1958. Obviously, the space required for terminals, gates, and runways was minimal. That was before the eco-tourism boon and the relatively low cost of air travel. Looking at the building, street side, it doesn’t seem much different from any other neocolonial white-walled structure with the red clay tejas shingles.  Hence, the museum that opened in 1978 is not grandiose, even if MAC boasts a collection of 6,000 pieces of art.

The one remaining exhibit from Sabana Airport is the work on the walls of the Salon Dorado.  This was a VIP waiting and meeting room for diplomats and dignitaries. Think executive club for the one percent. A French-born artist who took up residence in Costa Rica crafted 3-D murals in 1939 and 1940.

While the wall coverings are shiny bronze in appearance, the carving is stucco. An overlay of bronze paint and lacquer creates a heavy and rich effect.  The murals cover all four walls, for a total of 150 square meters. The images seem reminiscent of Diego Rivera, albeit in monochromatic bronze. The carvings relay Costa Rica’s history and traditions along with the different cultures.

MAC is open Tuesdays through Sundays from 9 a.m. to 4 p.m. Free admission.

*Andres Fernandez, Liquor Factory.  The solid heritage of a vice. 2010.