Alone in the Rainforest 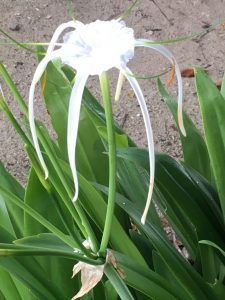 Early riser that I am, I am the first person in the Cahuita tropical rainforest. Well, second. The park employee is opening up the area.  Wanting a guide to show me around, I wait more than an hour before one arrives. No worries.

I practice yoga in the welcome center gazebo until the first guide arrives. It is a beautiful delay. Downward dogs, warriors, and twists, overlooking the Caribbean. Perfect start to what ends up being more than four hours walking through Costa Rica’s 2,700-acre Cahuita National Park.  Most of it, in solitude.

A Guided Walk Sandwiched Between Stretches of Solitude

As much as I recommend hiking through the forest alone to feel the majesty of this park, a guide is definitely worth the money. I hire Ronald. He was born in Cahuita some 60 years ago. Ronald has finely-attuned eyes and ears. On this 90-minute walk, he spots so many examples of the richness in the biodiversity, that to me just blend into the backdrop.

For example, he beams his red penlight up a tree. I see bumps in the bark. Murciélagos, he says. Bats.

I’ve always been amazed by Costa Rica’s pin-sized ants that carry leaves a thousand times their size.  Ronald’s long spindly finger points out many of the leaf-cutter ants’ creations. Among them, enormous fossil-like cocoons. Trails that appear to be formed by people trudging through the forest. Holes that I would guess were from a snake.

In the short period of time that I’m with Ronald, beyond the bats and ants, he finds mapaches (raccoons), cari-blancas (white-faced monkeys), caimanes and rainbow toucans. He explains that the rusty-colored water is from the tannin in the beach almond trees. Despite the reddish hue, the water is pure and clean, he assures me.

While the time on my own in the park is magical, the only wildlife I spot myself are butterflies, spiders, and a few birds.  So, while I vastly appreciate my alone time in the forest, I have to acknowledge that I’m not yet sensitized to finding wildlife. No matter how hard I may look. Plus, I like to hear a bit about things from Ronald’s perspective. When Ronald says goodbye, not far from the entrance, I continue my journey inward.

Alone. In the past hour, now, I haven’t seen a single person. The paths are fairly well marked. The first half pretty much edges the Caribbean. The second half veers away from the water but has hanging walkways.

It’s fairly dark in the park. The lush canopy forms an enormous rooftop made up of thousands of umbrellas. After a nice walk, I find one of the sole oases. There are two picnic benches under a metal roof.  No water. No bathroom. But there’s a legend map, where I note that I have another seven kilometers ahead. If I continue the journey, that is. My alternative is to return the same way I came. A little more than a mile back to the main entrance.

Not in a rush to decide if I go forward, or backward, I sit down on the bench. Eat some grapes. Soak up the abundant greenery and wildlife surrounding me. Listen to the sounds of the ocean waves. Looking to my left, and straight ahead, I watch the foamy waves in the Caribbean.

It’s taken me a long time to get to where I am. Because I look all around me. Up. Down. Ahead. To the sides. I’ve been to other national parks in Costa Rica, but possibly the solitude of this place gives it a different feel. Rather than just walk briskly from point A to point B, I feel “in the moment.” There is a slight sprinkling of rain on my journey, and I note how the canopy of the tropical rainforest keeps me dry.

Giant Umbrella in the Sky

Now, enjoying the scenery and the quiet at the shelter, it gets darker. And louder.  The light raindrops convert into a heavy downpour.   The clattering of the rainfall on the metal roof is soothing.  I’m enjoying hanging out right here, surrounded by heavy rains. The rainforest may be one of the driest places for man, animal, or insect, in a tormenta. All the while, the canopy and its mazes of vines, branches, and leaves are soaking up the water like a sponge. I feel blessed to be in this place.

In a tropical rainstorm.

After my sensory immersion break, soaking up the sound of the rain showers, inhaling the cool misty air, admiring nature’s wonders, and staying dry — a window begins to open up in the sky. Slowly, the clouds dissipate and the sun peeks out. Just barely. As it sparks fragments of illumination onto the mirrors of the waterfront, I feel re-energized. I continue on the long road.

Cahuita National Park is an incredibly beautiful place to visit. There’s something special to being here, alone. One evening, at sunset, I chat with a Canadian woman outside the entrance to the park. She heads here, daily. Alone. That said, inquire about the days and times that the cruise ships pass through here.