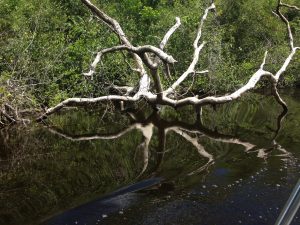 Travels through the Underworld

This is not an ATM to make your cash withdrawals or deposits. Rather, it’s a depository for history, spirituality, geology, and life sciences.  ATM is the name for the highest-rated adventure tour in Belize. It stands for Actun Tunichil Muknal or the Cave of the Crystal Sepulcher. Sounds a bit like an Indiana Jones adventure, and in reality, it is.

The archaeological site was inhabited between 200-900 AD. At one time, the population in the surrounding area reached 12,000 to 15,000 people. Now, it’s fairly sparsely inhabited.

One of the things that makes Belize unique is its underworld or Xibalba. Caves were sacred sites for the Mayan ceremonies to take place. Today, many of those caves are turned into natural adventure spots. Places to go cave tubing.  Or, like ATM, a triathlon site for cave diving/swimming/hiking and trudging through rivers.

“Belize is like a Swiss cheese,” says our guide, Carlos the Caveman. “We have the longest underground water system.” Water sinks through the limestone to form caves, he explains. “ATM was discovered many moons ago by our ancestors. We had respect for caves.” He says the older generations told their children and grandchildren not to go into caves, as there are spirits within.

While the Belizeans in the Cayo district have known about ATM, and other caves, for generations, a foreigner who was studying geology was intrigued by it. He, along with a Belizean Ph.D. was among the initial explorers and excavators in the area. In 1986, the government of Belize opened ATM to the public. Then, National Geographic named it as one of the top Sacred Places of a Lifetime. And, tourism spiked. The National Institute of Culture and History, in collaboration with the Belize Audubon Society, currently manage the ATM Archeological Reserve.

No cameras are allowed on an ATM journey, so try to imagine the following. You are entering a five-kilometer-long cave, giving up the last of your sunlight. The water at the entrance to the cave is a beautiful turquoise.

Step inside the lengthy paths at Carlsbad Caverns. Depending on the rainfall, you may be treading water, unable to feel ground. The water is always the same temperature, just as the air in the cave is a steady cool one. Regardless of the heat outside, the water and air here are refreshing. Your body is routinely submerged to swim or wade, and then you find yourself soaked with your upper body being chilled even more by the air.  Just when your skin gets used to the air, and the water evaporates from your pores, bam. It’s back in the water to continue on your journey. Sometimes the water is still and calm. Other times, you have to brace yourself to cross a submerged current.

You pass through chambers and tiny openings. At some points, the cave may be 500-800 feet deep. There are active and dormant stalactites and stalagmites everywhere. Some connect to form pillars. Others have broken off and lie on a diagonal blocking your passageways.  Still others form magnificent velvety white “curtains.” Other formations look like Chac Mool, and a nativity scene or dozens of buddhas, depending on your reference point. Regardless, the place oozes with otherworldliness.

Now, look beyond the rock formations and you will find ancient Mayan artifacts. Scattered throughout the many chambers of the cave are ceramic vessels. Not your ordinary pots and plates, these smooth round and oval pieces were ceremonial pieces. They most likely were used to burn copal and other forms of incense. The surfaces are so perfect, one assumes they must have had some form of the pottery wheel. Or, magic hands.

In many areas, there are also dark splotches on the ceramics or on the cave itself. Some may have been from the burning incense, but most of these smoke stains are probably from the torches that the Maya carried inside the caves. Other shiny dark black splashes in the caves are manganese.

From darkness to light. The black manganese, dark smoke stains, light grey rock formations, and then — near white fragments. Bones. Skulls. Skeletons. Excavations uncovered the bodies of 15 people, ranging in age from eight months to adults, buried here. Though not all on display now, all the remains are thought to be male. It is guessed that they were killed (sacrificed?) by the force of a blunt object to the head.

Then, there’s the lone female. She has crushed vertebrae. Moreover, her skeleton lays in an unnatural position for a burial. This is the Crystal Maiden. She is the namesake. Actun Tunichil Muknal. Her skeleton seems to be perfectly intact and preserved. She is almost lying on a shelf in the largest chamber. Considering all the rushing water that runs through the cave, it’s a bit eery to see how her delicate bones have remained exactly as they were at her time of death, more than 1,000 years ago.

Our leader is Carlos the Caveman. You can’t go wrong with a name like that. Our caveman instills respect for the holy space. There are rules to follow, established by the government, and good reasons for all these rules.

Among the rules, first, no groups larger than eight visitors. We are only two, and I can see how it could be dangerous for a guide to have even a handful of people they need to guide through the deep waters, unstable rocky floors, spiky stones jutting out all around, and slippery surfaces you have to scoot up, and down, sometimes, amid currents.

Second rule. Life jackets for all. While the bulkiness can make it harder to squeeze through spaces you think are impossible to get through, Carlos gives us tips to make it easier.

Rule #3. No bare feet or shoes within the final great room where the Crystal Maiden lies. This is to protect the area.

Rule #4. As mentioned before, no cameras. This, apparently, is a result of a tourist that dropped his camera and it damaged remains of one of the human skulls at ATM.

Finally, you can only enter with a licensed ATM guide. Carlos has been caving for 20 years. He, and 22 others, passed the rigorous exam to become an ATM guide.

The Journey is Half the Fun

ATM is situated in the Tapir Nature Reserve, seven miles from Teakettle, a blink and it’s gone down. ATM is about an hour’s drive from Belmopan, the nation’s capital, or from San Ignacio, where many tours originate. From Belize City, consider private car hire. Carlos the Caveman, and others, can coordinate hotel or water taxi pick-ups if needed.
From Teakettle, you pass through coconut, teak plantations, and endless orange groves, sprinkled with long stems of birds of paradise. While the land is primarily run by the local Mennonites, Carlos tells us that many Central American refugees are also living here. Approximately 40 percent of the countries crops are produced by the Amish and Mennonite communities. Originally from Germany, some say they passed through Russia before landing in Chihuahua, Mexico. They migrated to Belize in 1958. While many still use horses and buggies, others are “mechanized” Mennonites wearing jeans and working their lands with tractors and crop dusters. They live in communities that they call “camps” with their own schools and cemeteries.

To get to ATM you have to hike across three rivers, which also may be filled with water above your head. Once at the sacred site, you have to swim, climb, and squeeze your way through 500 meters of crevices and passages to get to the largest room where the Crystal Sepulcher remains. Expect to be soaking wet the entire time, and wear shoes with good treads that can withstand being immersed in the water for more than an hour.

Carlos made the hike on dry land interesting. He brought along his meter-long-machete and chopped away to give us a taste of quinine, licorice, and citronella leaves. He also cut into a termite nest and offered us the live termites to eat. According to Carlos, they taste like carrots. He also poked a hole into a chewing gum tree so we could see how the sap becomes gooey and sticky. Just like Elmer’s glue, he said. Times like this that I’m glad I’m vegetarian.