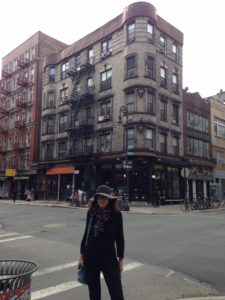 We live in a melting pot. Perhaps one of the places that most attest to this is New York City. People from all parts of the world, representing all races and religions, poured into New York City, seeking better ways of life. The Big Apple exudes multi-culturalism at every corner. The Statue of Liberty and Ellis Island represent our history as a land of immigrants. A lesser-known great place to visit to understand our melting pot roots is the Tenement Museum.

While the Statue of Liberty and Ellis Island were the first sights seen by many a new immigrant, for many of those that stayed in New York City, the Lower East Side was their next stepping stone. The Tenement Museum, just off Delancey Street, is not your typical museum. There are no pictures or objects with a one-line description. For 25 years, The Tenement Museum has offered visitors an immersion into a day-in-the-life of an immigrant at 97 Orchard Street.  Tour guides take you through the tenements and introduce you to people that lived there. You learn their names, their personalities, their challenges, and their milestones. For example, Dora Meltzer who read palms for 15 cents lived on the second floor, above the Schneider’s saloon.

You can select a tour within the tenements that focuses on the experiences of the Irish, the Germans, the Jews, all of whom made these tiny tenements their home in the land of opportunity.  Another option is to “meet the residents” played by costumed interpreters, or, select a walking tour of the Lower East Side.

The tenements were the first apartment buildings, before the age of chic city living and condos. Built in 1863 by a German immigrant, these were inexpensively constructed wooden block cubes that could house low-income families in fairly tight quarters.  It was the gateway for immigrants seeking low-cost housing, and a community to ease their transitions to life in the USA. At the time they were first occupied, almost half of New York City’s residents were immigrants and their children. Most don’t realize that New York City, at one time, was the third-largest German-speaking city in world. The blocks surrounding 97 Orchard Streets were considered primarily a German neighborhood until 1890 when Eastern European Jews found their way here. So large was the influx of Jews that The Lower East Side became the largest Jewish city in the world.

People struggling to make a living crowded into the tenements. Many worked in the garment industry. In the year 1900, there were 25 garment factories on the block where the Tenement Museum sits, and 2,200 people lived on its two acres.

One 90-minute tour focuses on the shopkeepers here, including John and Caroline Schneider who came to the U.S. in the 1940s from Prussia. They arrived as young adults, so were fluent in English and German. John went to war as part of musical regiment of the American forces. At the time, ten percent of the civil war army troops was German Americans. John returned to New York City when musical regiments were disbanded in 1864. That’s when he and his wife opened a German saloon on the street level at 97 Orchard Street.

Most the surrounding small businesses were also owned by immigrants. Above the saloon were 22 low-income serving apartments with low ceilings, no soundproofing, and minimal entries for natural lighting. Rent was about $50 a month back then. Today, a small 325 square-foot-apartment in this neighborhood would run about $3000 a month. These tenements were so cramped, that in fact, for many years it was illegal to build residences that small.

The tight quarters were probably just one more reason why the beerhouse was so popular. Back in the 1800s, beer was considered a family and social drink. When the Germans brought lager to New York, they also brought a relaxed attitude about drinking. The German beer saloon was not a place to over imbibe. Women were not allowed to enter, alone. However, they were very welcome on weekends when the kids could drink a five-cent beer along with free food.

“The Germans were a motley crew,” says the tour guide. They had different religions, and there were also plenty of free thinkers.

The German beer saloon was important to the immigrants to maintain their culture. While mainstream Protestants were opposed to alcohol consumption, throughout this little Germany there were 724 saloons.  German businessmen met at the local saloons.  Two organizations that met at John and Caroline’s place were the Oddfellows and the Red Men. Both stood for being kind to strangers and looking out for the community. Their premise was that united, they were stronger. They served as defacto social service agencies.

John and Caroline lived behind saloon.  Times were much harder back then, especially to prepare meals for crowds. Caroline cooked the food for guests on a coal-burning stove. The tenements had no running water or gas until 1904. All saloon patrons and tenement residents had to share the only four bathrooms in the building.

Saloons and beer gardens had to be closed on Sunday. Therefore “8,000 front doors closed and back doors opened on Sunday’s,” the Tenement tour guide says. The Germans believe it was their civil right, and an expression of freedom of religion to frequent the saloons on Sundays.

John often served as a translator, and wrote letters for people. Sometimes he was the unofficial local banker.  Who could have imagined, back then, life would eventually run around ATMs, online translator apps, and microwave ovens.

The museum is now a National Historic Landmark dedicated to the history of the iconic neighborhood and the immigrants who built this city and this nation. To take a stroll through history, visit the museum, any day except Thanksgiving, Christmas and New Year’s Day. Buy tickets online to save yourself a spot, and time. https://www.tenement.org