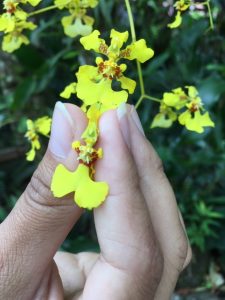 They say diamonds are a girl’s best friend. I don’t own a one. Nor do I care much about any precious gemstone.

My treasure trove is being surrounded by nature’s living glories: the incredible colorful jewels of plant and animal life. That’s why I return to Costa Rica again and again. No matter what town or region I’m in, Mother Nature’s masterpieces surround me.

Costa Rica is just the size of West Virginia. Yet, in addition to the many privately run eco-centers and businesses that protect or showcase the biodiversity, there are 28 national parks, 58 wildlife refuges, 32 protected zones, 15 wetland areas/mangroves, 11 forest reserves, and eight biological reserves.

Sometimes, the sheer sizes of the national parks can be overwhelming. Some of my favorite places in Central America are smaller butterfly gardens. Now, I found something equally enjoyable. The tiny Monteverde Orchid Garden is packed with 500 specimens. In a lapse of just one 45-minute tour, you can learn and view so much.

Before we took a look at the gems in the gardens, our bilingual guide pointed to a large framed poster. It was time for Orchidaceae 101. I admit. I knew almost nothing about flowers. Or, most everything I knew was incorrect.

Here are just a few highlights gleaned from a quick stroll through the property that is just a five-minute walk from the Monteverde bus terminal in Santa Elena.

The jardín de orquídeas is open 365 days a year from 9 a.m. to 5 p.m. In addition to the walking tours, there are virtual visits available. To book, or for more information, view their website.

Monteverde is about a three-hour drive from San José, and two-and-a-half from Liberia. Although it is in the province of Puntarenas, it is about a one-hour 45-minute drive from the Pacific coastal city of Puntarenas. It’s in the middle of the country, set high among the cloud forests. If you head to Monteverde, don’t miss adventure activities.