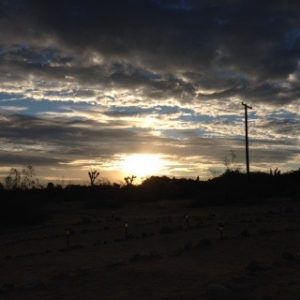 Yoga is everywhere in the United States. Most big box stores sell yoga mats, straps and blocks. Those that want to get their fix of yoga on, and off, the mat tend to head to expensive retreats in places like Costa Rica. There’s a great alternative that thousands choose, each year. Bhakti and Shakti Fests offer it all, at a reasonable price.* A crossroads of all things yoga, these festivals have a great mix to feed the body, mind, and spirit from 7 a.m. (or earlier) to 2 a.m. (or later).

It’s the Lollapalooza for yogis. Created by the man who brought yoga to Woodstock, the Bhakti/Shakti Fests appeal to Gen X, Gen Y, Millennials, and Baby Boomers alike.

People from all over North America, and beyond, head for Joshua Tree, California, each September for the annual Bhakti Fest. Shakti Fest, its springtime equivalent, takes place May 12-14 this year.

The festivals are rooted in yoga, Kirtan (devotional music), and meditation. There’s a nice meeting point of ancient and modern, traditional and non-traditional spiritual practices.  It’s a smorgasbord for the yogi.

At Shakti, aside from three concurrent yoga sessions, there are two music stages, five workshop areas (including a Family Village, a Men’s Lodge, and a Women’s Dome), a vegetarian food court, aquatic yoga, and a marketplace. For those needing to chill, there is a Healing Sanctuary with massage therapists and energy workers, plenty of meditation and breathwork workshops, and nightly crystal and/or Tibetan bowl sound baths. There’s even a rose petal and cacao ceremony.

To steep oneself into the world of yoga, experts share their knowledge on a wide range of subjects, including Vedic astrology, Ayurveda, and Sanskrit.  Many of the guest speakers, yoga instructors or musicians, blend together everything yoga.

For example, Oregon-based Jaya Lakshmi and Ananda are accomplished musicians with a dozen CDs ranging from mellow mantras to electronica.  At May’s Shakti Fest, they are scheduled to lead three 90-minute yoga sessions and perform on the main stage Sunday afternoon, May 14.

Ananda explains, “My own yoga practice has been heavily influenced by the teaching of Kundalini Yoga as taught by Yogi Bhajan.  In this practice, there is quite a fusion of asanas (postures) with mantra meditation, bhakti (devotion), breathwork, and more. In fact, Yogi Bhajan taught kriyas, which oftentimes are a combination of all those things. Almost always the breath is linked with movement and also mantra. Shakti and Bhakti Fest are a super recharge to my devotional practices.  And they just get better and better each year.”

Govind Das and Radha are another married couple that blend mantra music with movement. Based out of Southern California, the couple is leading three yoga sessions infused with their live music. Additionally, Govind Das hosts a men’s workshop. Then, they perform on the main stage closing night.  For those that aren’t ready to go home, they offer a post-intensive on Monday, May 15. The latter includes dialogue, journaling, a silent meditative desert walk, teachings from the great masters, plus, plenty of music and Hatha flow. Their session is designed to help attendees extend their weekend practice and learnings into their daily lives.

Other musicians/yogis on the lineup include Saul David Raye, who also hosts a pre-intensive, Prajna Vieira, and Johanna Beekman. Vieira and Beekman perform on Friday, leading into the featured artist, Donna De Lory. Although her personal style of music is kirtan, she toured with Madonna for 20 years and has recorded with Carla Simon, Santana, Selena, Bette Midler, and Barry Manilow.

Saturday’s main stage features Saul David Raye with his soothing vocals and instrumentals. Then, high energy Jai Uttal switches between samba, Beatles-inspired rock, and traditional Hindu invocations. Closing out the evening is the multi-talented Joss Jaffe.  The young Joffe has a solid repertoire of Dub Mantras from reggae to Indian ragas.

Canadian engineers, Betty and Bill,  created their own Kirtan band, Shanti Maya, in part fueled by their experiences at Bhakti Fest.

“I read once that every human culture that has ever existed on our planet had two things in common; they had music, and they sought a connection with the divine,” recalls Betty.  “Devotional music, the musical component of bhakti-yoga, is that sweet place where these two most beautiful pieces of our humanity come together.” She says the music and the artists are a major draw.  But, it goes far beyond that.

“The music itself is blissful, and all the artists have their own unique musical styles that almost always keep us entranced. We all come in common purpose, and that is to feel safe and enriched in one another’s company,” says Betty.

Set on 450 acres in the high desert, Bhakti Fest is a vegetarian, family-friendly, safe environment free of alcohol and drugs. Children 12 and under are allowed in for free and there is a specific Conscious Kids Land, where children can take part in music, yoga, and enlightened play.

“Shakti and Bhakti are a place to celebrate the Vedic traditions of India in a modern western setting. The venue is ideal because the land and the Joshua Trees naturally hold a container for people to immerse into Spirit,” adds Ananda.  “The mixture of chant artists, teachers, and presenters offer participants a wide flavor of teachings for their personal journeys.”

Joshua Tree is located about 30 minutes from the Palm Beach airport. It’s also a comfortable drive from San Diego, Los Angeles, Santa Ana or Ontario. While many choose to camp, on-site, there are plenty of smaller hotels and AirBnbs in the vicinity.

Bhakti Fest is a nonprofit 501c3 organization. The festival donates a percentage of its funds to charities and other nonprofit groups that provide food, education, and environmental beautification programs around the world. These include Food for Life Vrindavan, Love Serve Remember Foundation, Ramana’s Garden, Seva Foundation, Share Your Care, and Woman’s Earth Alliance.