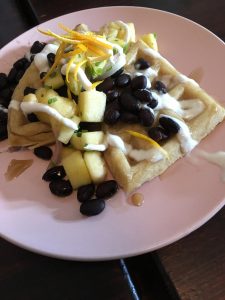 Ann Arbor is best known for the university.  While just a short drive from the Detroit airport, it has a very different feel from the automotive city. Midwest Living, in 2017, named Ann Arbor one of the best “Midwest Food Towns,” possibly because there are 300 restaurants within a 20-mile radius. Keep in mind that Ann Arbor and all of Washtenaw County have a population of only 359,000 compared to Detroit’s Wayne County accounting for around 1.7 million residents. So that’s a lot of finely-prepared food options per capita.

Among those 300 food businesses are a good assortment that can cater or adapt to vegetarians.  Huffington Post placed this college town among the Ten Most Vegetarian Cities in the U.S.  Animal rights activists agreed. Ann Arbor made Animal Equality’s Top 10 Vegan-Friendly Small Cities.

Following are ten veg-friendly places in greater Ann Arbor. Note, these are not a ranking, rather a listing of ten spots worth recommending.

No Bones About It: Strictly Vegetarian

1. Seva seems to be a favorite among locals, regardless of their dietary habits. The all-veg diner opened more than 40 years ago. It was so successful it moved into a larger space in a Westgate retail center.

David Goldberg is a retired math instructor who has gone to Seva for many years.  He says the food is far from dull. “Seva stands out because they amaze with great flavors and textures, and presentation.  While I’m not veg or vegan, I feel no sense of loss there.  Seva’s yam fries are beyond naughty.”

Seva offers a wide selection of gluten-free vegetarian dishes, and even serves up vegan gluten-free ice cream in three flavors: volcano salt vanilla, coffee and maple bourbon. Lest you want your dessert before your main dish, consider starting off with parsnip chowder which was featured in Vegetarian Times. Taste the tempura-battered cauliflower, or gluten-free or traditional bruschetta topped with a vegan basil cashew pesto. For entrees, how can you beat pumpkin manicotti? Maybe with spaghetti and meatless balls. Or, Seva’s Pad Thai which some claim is among the best.

2. The Lunchroom in Kerrytown, 3. The Lunch Room Bakery & Cafe open weekdays for breakfast and lunch by the UM north campus and 4. Detroit Filling Station.

“Since the food cart, we have used our baked goods as a ‘gateway drug’ into the rest of our food,” says Panozzo. “We try to mimic classic comfort foods that people know and love,” says Englebert.

Among those foods gobbled up by first-time diners are tater tots with homemade vegan cheese dip, and cinnamon rolls.

“Since starting our business we have tried to make our food appeal to all types of palates,” added Joel. “We have fine-tuned our menu for years now and find that most folks can find something on it they are comfortable with. Our menu circles the globe with different types of cuisines and styles.”

Most of the clientele are not vegan. They frequent the restaurants because they like the food, and want to opt-out of meat every now and then.

Panozzo explains, “We’re at least broadening people’s consciousness of what vegan food is. About 90 percent of our clientele do not identify as being vegetarian or vegan. Nowhere on our menu does it say vegan. We’re just trying to provide the option so people can make more meal choices.”

Nonetheless, special dietary needs seem to be more prevalent everywhere. “We have only seen the allergen and dietary restricted community grow in the seven years we have been in business,” says Panozzo. “I think more restaurants we will cater even more to these communities as they become larger.”

5. Vedge Cafe is a newer addition to the Ann Arbor special foods list. Vedge aims to please several dietary restricted communities. It is a small quick-serve all Kosher restaurant right on Main Street. Owned by a vegetarian registered dietitian, the menu clearly notes what items are vegan (most all) or gluten-free.

The “deli” sells seitan house-made salami, turkey, and corned beef plant-based alternatives. Sandwiches include a vegan Reuben, caramelized onion with cremini mushroom and tomato-mayo, and a have-it-your-way “s’wich” made out of their own deli cuts. Vedge offers a vegan gluten-free soup that changes every day and several hearty salad options.

6. Earthen Jar claims to be the first kosher restaurant in Ann Arbor. Their menu is not bagels and cream cheese, rather samosas, dal, and chana masala. This is an all-vegetarian Indian restaurant with a vegan buffet for only $6.99. Additionally, the menu indicates what’s gluten-free. While traditionally, vegetarian Indian dishes are made with ghee (clarified butter) and cream, paneer (homemade cheese), or yogurt is a common addition, Earthen Jar serves up at least seven vegan entrees including sag (spinach) made with tofu rather than paneer.  Even the mango lassi can be made with soy milk rather than cow’s milk.

Goldberg tends to order his food to go at Earthen Jar, which can pose a problem given the wafting scents of ginger, cumin, and cardamom in his car. “My preference is to fill a box —or three— to take home; not all of it generally arrives intact.  I look forward to facing downtown traffic with red lights that allow me to nibble safely while driving.”

Earthen Jar is so popular, and healthy, that a wide variety of its food items are sold at multiple retail locations, including the University of Michigan Hospital Cafe.

7. While not a vegetarian establishment, Ollie in Ypsilanti does a stellar job at serving tasty and healthy vegan and gluten-free dishes. Head chef, Travis Schuster says their mission is about “Trying to bring good thoughtfully prepared food at a price that is affordable, and also accessible where everyone feels welcomed.”

Schuster emphasizes a seasonal menu with locally sourced ingredients from area farmers and dishes made from scratch with whole ingredients, nothing processed. The theme is heartland comfort foods. A large number of the brunch dishes are vegetarian or can be veganized. For example, beyond the vegan burger and vegan burrito, the herbed mac and cheese can be made with tempeh and broccoli.  The dinner menu includes a tartine made with roasted sweet potato spread, charred broccoli and cauliflower tossed in tahini vinaigrette with fried shallots and toasted squash seeds which was out of this world. Schuster whips up a sweet potato burger with pickled beets, caramelized onion vegan aioli, cashew spread and farm greens.

Vegetarians, vegans, or those with gluten intolerances will all go away very content after a meal at Ollie.

8. Also in Ypsilanti is Casablanca inside an old Taco Bell drive-thru. As the name suggests, this is a Moroccan restaurant. However, also on the menu are middle eastern dishes that are popular in the U.S.

There are three hummus selections along with plenty of other vegan options including a handful of salads, lentil soup, baba ghanoush, falafel, foule, zalook and spiced carrots. The mix of flavors is sensational, and the hummus is as smooth as whipped butter.

9. For a twist on Mediterranean foods, try Ayse’s, a Turkish home-style restaurant where some of the patrons have been loyal to Ayse’s meals for 20 years. Many of Ayse’s guests, and her staff, are vegetarian, so she’s adept at modifying her meals. Some of her commonly served veg-friendly dishes include lentil soup, eggplant, salads, pilafs, boreks, and stews.

Just like when you’re at grandma’s, there are no menus. Even though Ayse’s not all that old, this is a traditional kitchen. The different food selections depend on what’s fresh at the farmer’s market. What you won’t have to worry about is the flavoring. She’s a master at not only combining spices but foods. For example, she serves pomegranate seeds with sliced olives for a memorable colorful appetizer with a mix of flavors and textures.

10. Finally, one of the newest eateries is big on healthy dishes. Fred’s opened in January 2017, inspired by the small health food cafes in California. The setting seems a cross between Soho chic and Southern California, and the options for health-conscious are plentiful. Everything is organic and freshly made in an open kitchen. Watch them make a bright magenta smoothie or green matcha cappuccino at the counter. Or, watch them slice and dice your fruits for mouth-watering smoothies in a bowl.

Given the range of food items vary significantly, go with your gal or guy pals and order a sampling of drinks and food items to share.  Among the savory and sweet vegan picks are avocado toast (featured in the first photo, without an egg), nachos with vegan cheese and radishes, and four varieties of power protein bowls made with delicacies like acai, almond butter, goji berries, seeds, and cacao nibs.

A shout-out to the Ann Arbor Area Convention and Visitors Bureau for inviting me to sample dishes at most of the establishments listed above.  There are plenty of other places in the area where you can special order vegan and even vegan gluten-free foods. Share your top ten, five, or three.